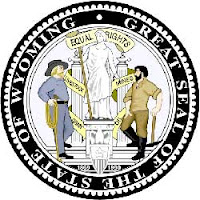 This week we are going exploring in Wyoming. In front of me, I have my Wyoming travel guide. I have all the other materials I use to decide what I might want to see, including computer links. There are sandwiches ready. Grab one and something to drink. Then pull up your favorite log and help me sort through this stuff to see what Wyoming has for people interested in nature. We'll try to pick some of the best and go exploring.


The official state nickname is The Equality State because it was the first state where women had the right to vote and to hold public office. Wyoming is the 44th state of the United States. The state flower is the Indian paintbrush, the state reptile is the horned lizard (which is also called the horned toad, but it is a lizard), and the state mammal is the buffalo.

No matter what you decide to do in Wyoming, make sure you take your camera. There is a variety of wildlife, including birds, reptiles, mammals, and fish of all kinds, not to mention mountains, plains, and wildflowers. There are geysers, lakes, and rivers and all of them are worth saving to look at later. For instance, Devil's Tower National Monument is a 1347 park covered with pine forests, woodlands, and grasslands. It rises 1267 feet above the Belle Fourche River. It is also known as Bears Lodge, a sacred site to many American Indians.

There are more than 8500 miles of trails in Wyoming. Hikers, bikers, skiers, and horseback riders can all find plenty of places to practice what they like to do. Buffalo Bill State Park holds the Shoshone Canyon, Logan Mountain, and the north and south forks of the Shoshone River. Plenty of trails to keep you busy. The park is a mountainous area with about 8000 acres of water surface, so water lovers can swim, canoe, kayak, and all the things they like.

Yellowstone National Park is probably best known for its geothermal features. There is a giant underground volcano called a caldera that lies beneath the park. It heats underground water and causes several types of geothermal features. Hot springs are pools of the heated water that can reach temperatures of up to 400 degrees. They are often surrounded by colorful mineral deposits. Fumaroles are like hot springs, except that the water evaporates before it reaches the surface. That causes a steady stream of steam, often full of gases like carbon dioxide and sulfur dioxide. Geysers like the famous Old Faithful are a build-up of boiling water and steam that suddenly erupt into a shower of water and steam bursting into the air. Then there are mud pots. They are like hot springs, but they collect in soil rather than rock and cause muddy areas.

Wind River Canyon Scenic Byway is 34 miles long following the same path used by Native Americans, pioneers, and explorers. You'll drive through the ancient rock cliffs of Wind River Canyon and on through the Wind River Indian Reservation. Keep your eyes open for bighorn sheep. Then at Hot Springs National Park you can soak in the world's largest mineral hot springs.

Wyoming is a state for nature lovers. It is the least populous state in the country so there is plenty of room to be out in nature. All you need to do is decide what things you want most to do and then find the area that has those things. Plan a short trip or a long one. Then get out and do it. Have a good time then come back and let me know what you did. I'm going take a look at the Piedmont Charcoal Kilns and then the Ames Brothers Pyramid. Then I'm going to see if I can find a jackalope which is Wyoming's official mythological creature. Links below will help you plan your adventure.