Skip to main content
Labels
Posted by Emma Springfield May 03, 2011 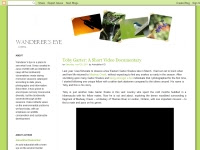 Aniruddha Dhamorikar is a naturalist from Mumbai who is interested in wildlife conservation and how humans impact the environment. In 2008 he decided to catalog biodiversity observations he made during monsoon seasons. He travels the Monsoon Trails with his cameras and takes pictures as well as notes.


Tungareshwar is a wildlife sanctuary covering about 85 square kilometers. Aniruddha took to this trail when the monsoon had just set in. His hope was to see butterflies mud-puddling along with a lot of other creatures. The butterflies were disappointingly scarce but he has photos of some. He has pictures of several beautiful flowers. Birds, beetles, and frogs are among the other animals he saw. Aniruddha felt that there were not many sightings, but I was amazed by everything he saw.

A walk along the Thames River watershed in Ontario, Canada gives us some stunning scenery. Aniruddha was hoping to spot some white-tailed deer. He wanted to learn more about North American flora and fauna. He was greeted by chickadees and Canadian geese and there is a bright red cardinal. A gray squirrel and several plants and flowers are present. He was dismayed to see a pipeline draining wastes into the river. And then he has his lovely white-tailed deer.

Long Point is situated on Lake Erie, one of the Great Lakes. The bay there is rife with wildlife. It is under the Atlantic flyway so migrating birds stop to eat on their ways. There are aquatic plants and animals. There are also animals that live at the edge of water areas like dragonflies, frogs, and snakes. We are treated to pictures of some of them.

Aniruddha also shares his photography techniques with us. He has several posts about how to take pictures. How to point-and-shoot snakes has tips about taking good pictures of snakes. There are some excellent photos to give examples of some of the snakes he has captured.

Wanderer's Eye is colorful and interesting to read. There is a wide variety of topics so I believe everyone will find at least a few things of interest. Do drop by and look through this site. When you are through, please leave a nice comment and tell him Emma sent you. The link is below.

Do you write a nature website or blog, or know of one, that you would like to introduce to our readers? Send me the information and I might feature it in one of my next reviews. Click here to find out how: Feature My Nature Site.

Labels: Nature Site Of The Week