Skip to main content
Labels
Posted by Emma Springfield May 24, 2011 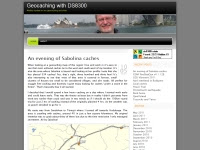 Martin Crowther is better known as ds8300 in the world of geocachers. He lives in Gavle, Sweden, but his searches for geocache treasures are certainly not limited to home. At the time he last updated his bio, he had visited twenty three countries with plans to add more to his list. There are 81 categories of Difficulty and Terrain ratings.


Martin takes us to New Zealand where he also visits four Earth Caches. An Earth Cache is found the same way as a geocache. The difference is that an Earth Cache is a feature of nature rather than a cache hidden by a human. At least that is to the best of my understanding. The bonus is that there may also be geocaches included in these areas. Martin took some beautiful pictures of his finds and explains what makes them special.

Geocaching can be a wonderful activity for a person alone. It can also be a family event or even a group event. There are many get-togethers planned each year. Martin decided to visit one close to his home. It was hosted by a Swedish/American family. The weather is Sweden did not cooperate and the day was rainy. Martin met the people who were there when he arrived and they all departed for some geocaching fun. However the rain caused him to depart early. He did find a few caches so the day was not a total loss.

At Quail Island Martin found another fabulous Earth Cache. Quail Island is surrounded by the Port Hills which are remnants of an ancient volcano. He won't give away the cache itself but Martin has some more pictures for us. There is a basalt column that has such a basic beauty. Near the cache is a graveyard for ships. Apparently this beach was a popular site for abandoning the boats. Again, photos show the skeletons of these vessels.

In one post Martin gives us a look at the maps showing geocache sites in his area. Then he narrows down to only the sites he has not found. Since he knows Gevle so well, he knows which areas to search and what conditions he might find. He also speaks about puzzle caches. They remind me of the treasure hunts we had when I was a child. One clue leads to another.

A vacation to Budapest, Hungary, was for seeing the sights. But a geocacher like Martin did pick up a few finds. He pointed out that not all maps are adequate for the geocacher and he found a good source online. You will have to read the post to find it. The are some photos of places of interest in Budapest, including a cache found near the Houses of Parliament.

Geocaching with ds8300 gives us an inside look at the world of geocaching. Martin lets us share in the sometimes mundane and sometimes exciting activity that is becoming more popular all the time. If you would like to learn more, visit Geocaching with ds8300. Before you leave, please leave a nice comment and tell him Emma sent you. The link is below.