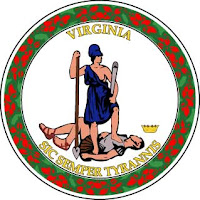 Virginia is our next destination. There is a lot to see so I want to get right to it. Grab yourself some refreshments and pull up your log. I've got the computer warmed up and all the usual materials are here, including the travel guide and computer links. The Old Dominion State is the 10th state to join the Union. The state dog is the American foxhound. The state tree is dogwood and the flower is also American dogwood.

With all that history, you might guess that the stories of ghosts and hauntings are plentiful and you would be right. Wandering any of the many Civil War sites, you will hear of hauntings by those who lost their lives in those places. At Edgewood Plantation, Lizzie Rowland is said to be still waiting for her husband to return from fighting in the Civil War.

Virginia has some great beaches. Virginia Beach has 35 miles of beach along the Atlantic Ocean. Sunbathing and swimming are pleasures there. The Francis Land House is a plantation built in 1805. It has gardens and trails so you can see some of the plants of the Virginia Beach area.

Arlington National Cemetery is in Virginia. Arlington was the home of Robert E. Lee. It was seized by the United States Government when Lee decided to remain loyal to his home state. After the Civil War, it became the final resting place for American soldiers, family members, and other important dignitaries of the country. Anywhere you look all you see are tombstones that seem to stretch on forever. It is very peaceful to meander through the cemetery.

The Virginia Creeper Trail is an old railroad bed converted into a multi-use recreational trail. Ride your bike, walk, or ride your horse for a relaxing view of scenery. This trail crosses rivers and creeks. You'll see unspoiled farmland and go through picturesque forests.

Pinnacle Natural Area contains some of nature's miracles. There are sinkholes, caves, and cliffs. Breaks Interstate Park has a deep gorge. At High Knob, you can look out over several states at a beautiful panorama. Hike, bike, or horseback ride the trails that wind through the Appalachian Mountains.

Just the history of Virginia will keep most people busy. But hiking, birding, gardens, water sports, caves, hang-gliding, scuba diving, rock climbing, parasailing, hot-air ballooning... well you get the picture. Look through the links below and find what you want to do, then do it. Then tell us about it. I have a lot of places to visit. Mount Vernon, Monticello, Arlington are but a few. I also want to pay my respects to Stonewall Jackson's arm and, if I have time, my respects also to the rest of him(he has another final resting place).