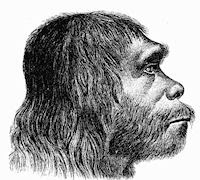 Did neanderthals have a sense of fashion? That's what some archaeologists claim. They say they have evidence that Neanderthals were using feathers as ornaments 44,000 years ago.

This leads to more claims that Neanderthals were not just simply brutes, and maybe they were as cultured as our ancestors the Homo Sapiens.

Marco Peresani of the University of Ferrara in Italy found 660 bird bones mixed in with Neanderthal bones in Fumane cave in northern Italy, located in a place called the Grotta di Fumane or the Grotto of Smoke. Many of the wing bones were cut and scraped where the flight feathers were once attached, suggesting the feathers had been systematically removed. 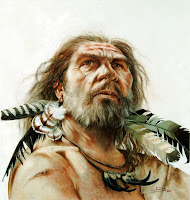 Fletched arrows had not been invented at the time, so this was not what the Neanderthals used the feathers for. These birds were also considered to be poor food sources, so that was also not an explanation. Peresani thinks that the feathers were used as ornaments, just as they also used shells for jewelry.

Some of the birds included in the find were red-footed falcons (Falco vespertinus); bearded lammergeiers (Gypaetus barbatus), a type of vulture; Alpine choughs (Pyrrhocorax graculus), a relative of crows; and common wood pigeons (Columba palumbus). The birds' plumages come in many different colors. Gray from the red-footed falcon, orange-shaded slate gray from the bearded lammergeier, black from the Alpine chough, and blue-gray from the common wood pigeon.

Scientists say that the use of bird feathers was very widespread. The use of feathers was a broad and complex practice among human ancestors, ranging from social significance and games to the production of ornamental and ceremonial objects. But they had not been previously associated with Neanderthals. Other researchers have found shells in association with Neanderthal bones and suggested they may have worn them as jewelry.

These findings were detailed online by the scientists on Feb.21 2011 in the journal proceedings of the National Academy of Scientists.


Related Articles On The Web