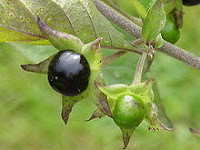 Toxic plants are all around us. Now not all of them cause death. Some cause mild discomfort. Some cause major discomfort. Some will cause your relatives to gather together to mourn and send pretty flowers (some of which are toxic!). The picture at the left is Belladonna, also known as Devil's Berries, Death Cherries, or Deadly Nightshade.


The berries look so succulent and appealing, don't they? All parts of this plant are fatal if ingested. And there are a lot more plants that are harmful to humans and animals.

In fact, The Conservatory of Flowers in San Francisco has an exhibit until October of this year called "Wicked Plants". It features poisonous plants and their place in history. For instance, a cow ate some snakeroot. A woman drank milk from that cow. "Milk sickness" was the result and that is how Abraham Lincoln's mother died.

The exhibit is based on a book written by Amy Stewart named "Wicked Plants". Some of the plants were easy to obtain, like tobacco, while others were impossible , like coca plants, which are not allowed by the government.

Ms. Stewart not only wrote the book, she felt like she should get to know the plants she was telling about. So she planted her own "deadly" garden. She has many of the plants there but she purposely left out some of the irritants like poison oak for obvious reasons.

Next week we go to Virginia.