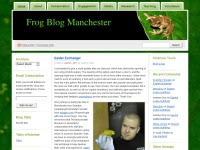 I know many people who collect frogs, as in knick-knacks and pictures. Andrew Gray collects real frogs for the Manchester Museum which is a part of The University of Manchester, England. Since he is a Herpetologist and Amphibian Conservationist, he also collects information about frogs. Then he uses that information to teach us.


On a trip to Costa Rica, Andrew and his companions were accompanied by a film crew from BBC. They found a rare and critically endangered species of frog. It was the first time The BBC had filmed a Red-eyed stream frog. On an excursion the previous year, Andrew had discovered a male Isthmohyla rivularis in the Costa Rican cloud forest. The species was believed to be extinct for 20 years. This year they hoped to find a female. They did indeed and also found some more males. That leads them to believe that they are mating and having babies too.

Andrew was working in the Vivarium when he received a call that someone was there with a golden frog. He was thrilled to get a rare endangered tropical golden frog. It was not what he had hoped, but was almost as good. A woman brought in an albino common frog. Andrew had never seen one before because they rarely live long. Predators can see them more easily so few reach adulthood. There is a lovely picture that can be enlarged so you can see this gorgeous frog up close.

Usually Andrew drives to Derbyshire to spot adders, so he was delighted to find three males about two miles from his home. He shares a video of a female adder from a previous excursion.

The final picture I will tell you about is a one-of-a-kind frog. Two different species of frogs were allowed to mate and produced unique offspring. This is done as part of research aimed at highlighting the conservation needs of critically endangered leaf frogs.

Frog Blog Manchester will teach you whatever you want to know about frogs and you will have fun learning. Andrew travels the globe to do research and find evidence of frogs wherever he goes. He is not limited to frogs... he also teaches about salamanders and snakes and other slithering and leaping  creatures. The research he does is absolutely fascinating. Have some fun and visit Frog Blog Manchester. When you have completed your visit, leave him a friendly comment and tell him Emma sent you. The link is below.