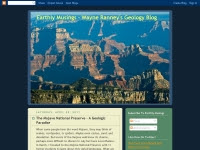 Wayne Ranney writes Earthly Musings. He is a geologist, writer, and trail guide. He finds peace and serenity when he is out in nature by himself. Wayne travels all over the world. He has served as an on camera geologist in seven documentaries for the Discovery Channel, National Geographic, and others. He also leads geology and hiking trips in the Grand Canyon.


When Wayne went to the Indian Ocean, he visited Reunion Island and Madagascar. La Reunion is a volcanic island that rises about 10,000 feet out of the sea. It reaches an additional 11,000 feet beneath the water. He and his group took a helicopter tour above the island and then landed in a "cirque" near the town of Cilous. Wayne told the group how the island grew with each eruption of the volcano and how the signs of that growth are visible in the rock layers. He believes that the cirques are more than simple calderas; they probably had help from water to shape them.

The trip to Madagascar showed the tsingy. Known as Karst in other parts of the world, they are limestone formations caused by erosion. The limestone needs to be very pure with no sandstone or shale mixed in. When rain falls on the limestone, it forms carbonic acid that eats away at the limestone. There are also mushroom shaped tsingy along the tide line that was caused by underwater erosion.

The trip to Fez, Morocco, is not out in the wilds. It does give us a good look at the way people live there. Morocco is proud of the fact that they were the first country to recognize the independence of the United States. Outdoor markets are where people buy the things they need, as people do in many places around the world. The medina means the neighborhood. In Fez, the medina  has over 9,000 streets of medieval age. Some are no more than narrow alleys. The city is still surrounded by a wall ten miles long. It helps to preserve the 9th century feel of Fez.

On the Lindblad/National Geographic Sea Lion, Wayne was a Study Leader for Smithsonian Journeys and visited southeast Alaska. He treats us to some lovely pictures of his trip. There is an eagle at The Eagle Recovery Center in Sitka, a totem pole, and beautiful scenic photos. He has a black bear that posed for him and fishing gear that looks to me like jewelry made of stones. The pictures of the glaciers are awesome.

Wayne shares his experience of shooting a documentary. The crew with him are from Australia. They are doing a segment about the erosion that caused the Grand Canyon. The special is called "Supercontinent". I am not even going to try to describe the experiences Wayne had during the shoot. His descriptions have the excitement that I cannot convey. I can recommend the spectacular pictures that go along with his narration.

In October of last year a series of severe storms with at least 8 tornadoes hit north and west of Flagstaff, Arizona. Wayne has pictures of some of the devastation to the trees in the area. The power of nature can be seen in the size of the trees and their roots that were ripped and torn by the winds.

Wayne went searching for the origins of the Esplanade Platform in the Grand Canyon.  The Esplanade forms a broad terrace down in the canyon,  creating a canyon within the canyon. Many think it was formed by the Colorado River. Others believe it to be due to the rock strata. Read what they found out and look at some breath-taking pictures while you are reading.

Earthly Musings is so full of pictures and information that I did not even try to tell the stories. Wayne does it much better than I. He has links to books and news articles about him listed to the right of his posts. They are worth taking a look. This is an exciting site. I urge you to visit. While you are there leave a nice comment and please tell him Emma sent you. The link is below.


Do you write a nature website or blog, or know of one, that you would like to introduce to our readers? Send me the information and I might feature it in one of my next reviews. Click here to find out how: Feature My Nature Site.
Nature Site Of The Week