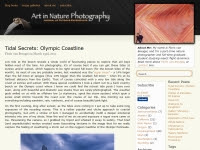 I have neglected the artistic enjoyment of nature for far too long. Today I will make it up to you with Art In Nature Photography. It is written by Floris Van Bruegel. He was christened as a "son of nature" at the Ribbon Falls in Grand Canyon when his parents took him there at the age of only a few months old. He believes they may have gotten more than they bargained for.


About 20 years later, Floris discovered photography. He takes pictures of the things in nature that inspire awe and peace in him. Then he shares them with us and hopes they will do the same for us. Floris also hopes that his photos will excite a few people to go out and get some of those feelings in person. His bio is fascinating to read. Just to know that he is doing his PhD in Control and Dynamic Systems, studying insect flight dynamics using high speed videography and realtime 3D multi-target vision based tracking makes my head swim.

After graduating from Cornell University, Floris took four months to explore the Pacific Northwest.  For his first adventure, he went to King's Canyon and Sequoia National Parks. His parents built their retirement home close by so he had a home base. Floris and his father went backpacking to spend a few days looking at the giant sequoia trees. There are about 75 groves of these magnificent trees west of the Sierra Nevada. Most of them are in the area they were in. You can read the story for yourself. Pictures are of redwoods, dogwoods, a hummingbird, a bear, and a witch.

Summer in the desert brings temperatures of up to 115 degrees Fahrenheit. It is a good place NOT to be. However Floris was a speaker at the first annual Sedona Photofest so off to the desert he went. He goes on to tell us that even though the temperatures on land fluctuate, the ocean temperatures are quite constant. The hot summer temperatures draw cooler air from the ocean and that creates rains. There is a mesmerizing picture of a summer monsoon over the Grand Canyon. The following day Floris took a photo of the Grand Canyon in all it's magnificent sunny colorful glory.

Between December and March, Northern Elephant Seals come to the California coast to fight. mate, give birth, and nurse their young. Elephant seals are members of the order Carnivora. Not only that, they are the largest animals of the order... larger that bears, tigers, and lions. These docile looking animals are actually very  aggressive when they feel a need to protect their territory. Floris tried to get a series of photos that tell the life cycle of elephant seals and succeeded quite well. His final picture is of seals lying on the beach at sunset. The one picture he was unable to capture was the green flash that can sometimes be seen at the end of an ocean sunset.

When he was a child, Floris liked to go with his father into the night desert to collect fluorescent minerals. In Australia they call this fossicking. They used an ultraviolet lamp to show which rocks would glow. These minerals can be found all over but seem to be more plentiful near old mines. Now he uses a camera to capture the splendor of these colorful rocks. Floris took some beautiful pictures and explained a bit about why the minerals glow under the UV light.

I saved this post for last. Floris has pictures of Christmas in Yellowstone National Park. His picture of Old Faithful Geyser is spectacular. The colors of West Thumb Geyser Basin in the snow with the snow covered evergreen trees in the far back is exquisite. Floris explains a bit about why there are so many geysers in Yellowstone. Take a look. The pictures alone are worth a view.

The articles in Art In Nature Photography are so informative. Floris does not just take pretty pictures... he knows about nature. His pictures are absolutely hypnotic. He uses so many different styles of photography and he gives us a unique look at his subjects. The best part is that he tells us the settings he used to get his pictures. They make no sense to a point-and-shooter like me, but a serious artist can benefit from his experiences. Please visit Art In Nature Photography. The link is below. After you are finished with being amazed at the pictures, leave Floris a nice comment and tell him Emma sent you.

Do you write a nature website or blog, or know of one, that you would like to introduce to our readers? Send me the information and I might feature it in one of my next reviews. Click here to find out how: Feature My Nature Site.

Labels: Nature Site Of The Week