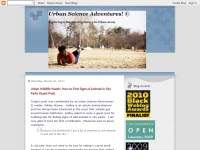 Urban Science Adventures is a blog that is the example of what we try to show at Nature Center Magazine. Here we can see that nature is all around us. We all know nature is found in a forest, or a desert, or in a rural area. Now we will be shown that for people living in the city, nature is right there too. All we have to do is open our eyes.

D.N. Lee (from now on I am going to call her DN) is our author. She is a biologist who is studying Animal Behavior, Mammalogy, and Ecology at the University of Missouri-St Louis. She has completed her doctoral studies in Biology and is preparing for a career in Science and Science Outreach. Urban Science Adventures is her web reference for environmental science, environmental education, and ecology. A few years ago, a friend joked that DN should have her own science program on television to teach urban youth about science. After giving the idea some thought, DN decided that it is not a bad idea. She worked as a resource scientist at a high school in St Louis, where she enjoyed her work so much that she created an after school biology club. The club allowed the kids to interact with scientists and real animals. Then she was the co-ordinator of a high school summer research intern program that had two students who contributed independent projects. Other projects with students helped DN to begin working to create, produce, and market a science program for urban youth.

DN has at least one page with some interesting links that promote urban nature, especially for African-Americans. The link for Xavier University needs to be updated, but there is a link to do so. The New York Restoration Project was founded by Bette Midler.

DN is fond of Arbor Day, if this blog is any indication. She has links to the origins of this tree planting holiday. She points out that each state has a state tree. She goes on to wonder if cities have official trees as well. She believes that the sycamore should be the tree of St Louis. She tells us how to recognize a sycamore. Then she shares pictures of these majestic trees from several different angles. There are also photos of seed pods and leaves.

Coyotes in the city have been in the news a lot lately. All the way back in 2007, DN observed that they were present in urban areas as well as rural. Coyotes live everywhere in North America, but there are fewer coyotes in areas that have wolf populations. Living in urban areas gives these hunters a variety of foods. They will eat garbage, animal food left outdoors, roadkill, and even pets. She compares them to German Shepard dogs. Coyotes are slightly smaller and slightly different in color. The main way to tell that you are seeing a coyote is that as a coyote runs, its tail sticks straight out with no curl or hook shape and the tip of its tail is black. If you see a coyote, sensible precautions apply. Another thing is that since they are related to dogs, diseases can be transmitted.

Who hasn't caught fireflies as a child? DN introduced me to a few things I did not know about the little summer yard stars. There are several different species of firefly, including a predatory species that eats smaller fireflies. If you are studying them, the pattern and frequency of their flash indicates the species. The lighting frequency allows males to find females for mating. Early evening is the best time to watch and catch "lightning bugs". There is a Firefly Watch Program online sponsored by the University of Boston. You can join by following the link DN provides and submit your observations to the program. DN says that students might be able to earn community service/service learning credits at school.

A list of more than 100 things-to-do outdoors is a sort of bucket list DN has created for herself. She has a link to her list and it gave me the idea to create my own, which I will do over the next few days. This would be a great family project as well. At any rate, # 77 is to catch a frog. I think she caught her first frog in Guana at Kaiteur Falls. Since then she has been a frog catching machine! She even has the children at the urban summer day camp catching toads and frogs. She has wonderful pictures of the frogs and their captors.

When is the last time you visited a science center or museum? DN really wants to know. She took part in a conference in Washington DC to determine how best to entice people of all kinds to use science centers as a recreation as well as a learning experience. With budgets being cut to schools, many of the schools are cutting out some of the programs that teach the things available at the science center. Most of them now have hands on exhibits that the kids love. They don't even realize they are learning something.

Urban Science Adventures is an inspired idea. DN is providing a service to people living in urban areas and those who live in more rural areas can learn a thing or two also. I am enchanted by the fact that she takes the simple every day act of taking a walk and turns it into a nature experience. I am more than happy that she chooses to share it with us. Her post for March 3 explains it well. Please follow the link below to visit. Look all around and then leave her a nice comment. Please tell her Emma sent you.