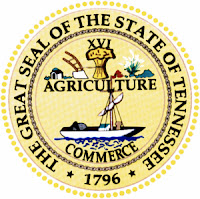 Let's take a trip to the state of Franklin. What's that? There is no state by that name? Oops. Originally Tennessee was known as Franklin. It was disbanded when it was allowed to send representatives to the North Carolina legislature. Then in 1796 Tennessee became a state in its own right becoming the 16th in the United States. So get some refreshments and pull up a log. I have the travel guide and all other materials ready. Let's go!


The Volunteer State is rich in history, especially Civil War history. It is home to the Tennessee Valley Authority, also known as the TVA. The TVA was a brain-child of the United States Government. The Great Depression and the need for electrical power in rural areas created the concept of TVA to provide jobs and power. And Tennessee had the waterways needed to implement what is now the country's largest utility provider. The state horse is the Tennessee walking horse. The wildflower is the passion flower.

Tennessee was the last of the southern states to secede from the Union and join the Confederacy during the Civil War. Even so, there were many people who were pro-Union. Maybe that's why there were so many bloody battles fought here. Because Tennessee was a part of the United States when the Emancipation Proclamation was announced, they were not bound to free their slaves. However, when the war was over they amended the state constitution to prohibit slavery. Then they became the first seceded state to have their elected officials re-admitted to the United States Congress. Abraham Lincoln had chosen a man from Tennessee to be his vice-president during his second term of office. That man, Andrew Johnson, became president when Lincoln was assassinated.

The Great Smoky Mountains are so called because when you get up in the morning and look at the beautiful scenery from a ways off, it looks like smoke rising in the trees. It's quite a sight to see. The Great Smoky Mountains National Park is a World Heritage Biosphere Reserve. Millions of visitors come from around the region and the world annually. Covering nearly 1,000 square miles, it is home to temperate rainforests and some of the rarest and most unique plant life in North America. It is here that you can find almost every nature activity you can think of; hiking, biking, horse trails, canoeing, white water rafting, camping, swimming, birding, watching for wildlife, star gazing... It's all here.

Old Stone Fort State Archaeological Park is not actually about a fort. It is a 2,000 year old Native American ceremonial site, consisting of mounds and walls that combine with rivers and cliffs to form an enclosure about 1 1/4 mile around. For about 500 years this hilltop area of 50 acres is believed to have been a central ceremonial gathering place. It has been called the most sacred site of its time in the United States. The white settlers to the region tended to call such constructions forts. Hiking and camping is a main attraction. There are also picnic areas with grills for cooking. If you walk through the trees for a ways to the Duck River, you might find a very special spot where the river is about 4 to six inches of crystal clear water. It flows so slowly that you can let the kids wade to their hearts' content. Even a baby can crawl around and have a good time.

Roaring Fork Motor Nature Trail is a narrow winding road that you can drive at your own pace. You will have the opportunity to look at it all. Or maybe you can park and just sit quietly and wait to see some of the animals like bears. Mornings and evenings are the best times.

If plants are your thing, there are more than 1,000 varieties of plants, trees, ferns, grasses, and flowers. Cherokee Trail of Audubon Acres covers 130 acres. The trees are all identified with their common names and biological names. Then going a couple of steps further, they are identified by their Cherokee Indian names and with their uses.

Chickasaw National Wildlife Refuge is 25,006 acres and has the largest block of bottomland hardwood forest in Tennessee. It is an important wintering area for mallard ducks. Other birds you might see are black ducks, gadwall, pintail, teal wigeon, wood duck, ring-necked duck, and hooded merganser.

More than 8,600 caves make Tennessee a spelunkers paradise. Many offer guided tours and they are certainly worth a look. The Bell Witch Cave and Canoe Rental (what a name!) is associated with the so-called true story of the Bell witch. It is considered to be one of the most haunted places in America.

Tennessee has more than 630 waterfalls, 260 natural arches, bridges, and rock windows. Moonshiners, who made and sold illegal whiskey were plentiful in this state. You can actually still travel on the same roads the moonshine runs were made. As for legal whiskey, one of the most famous distillers in the world is Jack Daniels Whiskey located in Tennessee. Tennessee walking horses are great horses and bred right in this state.

As you may have guessed, I have a special feeling for Tennessee. I lived here for a few years and loved it. It's a great place to visit, too. So much to see and do. Practically everybody over the age of 3 months plays guitar and sings. It is the home of Country Music after all. No trip to Tennessee would be complete without stopping to pay homage to the old Ryman Auditorium where the Grand Ole Opry was held until they built the new complex. I want to see the full scale Parthenon in Nashville. I'll visit homes or museums dedicated to every music star in the state. I'll check out Sun Records where many of them got started. Then I'll go to the Salt And Pepper Museum in Gatlinburg which just happens to be my favorite "tourist trap" of all. If you want a souvenir, they've got it! Let me know how you did. I'll be home by then too. So travel to Tennessee. There are links below to help you decide where to go.