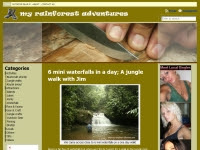 Keong is the author of My Rainforest Adventures. He lives in Kuala Lumpur along with his wife, Sin Meun, who often accompanies him. Their dog, Sox, goes along when she can, but Malaysia has strict rules about taking dogs in public. Keong and Meun met when they were working on the island of Langkawi in an outdoor education center.

While canoing on the Perak River, they came upon an area covered with lotus. It was a surprise to them because they had never seen lotus on this river before. The lotus were in a small channel, just around a bend in the river. There weren't many flowers, but Keong and Meun took a lot of wonderful pictures for us. Keong says that the seed pods are good to eat, but he left the few he found for the water buffalo.

Keong went to the Malaysian jungle with no preset destination in mind. He and two friends asked a local nature guide where they might go. He told them about Gua Pintu. Gua Pintu means Door Cave. There is some talk of renaming it as Gua Gajah Mati, which means Dead Elephant Cave. Yes, it is an elephant burial ground. At least two adult elephants chose this as their final resting place.

The scene was moving for both Keong and the reader. The bones of the elephants had deteriorated with time and humans as well as other animals left their marks. The site now has a local caretaker and is fenced off. It is not known why this spot was chosen by the elephants. They seem to know the end of their time has come and they lean against a tree to lower themselves to the ground before they die.

On a business trip to Tioman Island, Keong discovered the jungle there. The whole island is pretty much undeveloped. There is no gas station. Gasoline is in bottles that are recycled from mineral water bottles. There is no movie theater, no bowling alley, no shopping mall. But there is the jungle.

Keong saw markers along a formerly used trail, but other than that, it looked as if no human had been there. Huge rocks were atop one another forming little cave-like places. He crawled over and through, being careful to watch for bats and snakes. The one thing that was a surprise was that there are no wild boars on the island which is unusual in this part of the world.

Another trip to a previously unvisited area gave Keong the opportunity to eat Semai hill rice. He says it is slightly sweeter than the wild rice he is used to, but he liked it. He took pictures of the children in the house in which he was a guest. They were all delighted. Then Keong was shown a genuine Semai blowpipe. It is used for hunting. More than that, it is absolutely beautiful. There are several photos to show you the beauty of it. He also saw a set of stones that were used to start fire before matches and lighters were used. They had been stored away but an older man was willing to give it a try. Sadly, he was not able to start a fire before Keong had to leave.

I wish I had more room to tell about jungle food or waterfalls or many of the other adventures I read about here. You will just have to find them for yourself. This is a lovely site. The writing is pleasant and informative. The pictures are outstanding. Please visit My Rainforest Adventure and look around. You will enjoy yourself. When you are finished, leave Keong and Meun a nice comment and tell them Emma sent you. The link is below.