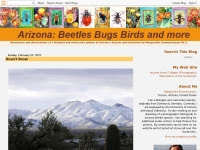 Arizona: Beetles Bugs Birds and more is a mouthful of a title. It is written by Margarethe Brummermann, a biologist who paints watercolors. She is a native of Dortmund, Germany. At the present time, Margarethe is working for the University of Arizona Arthropod Collection. A dream of hers is  to write a field guide to Arizona beetle species.


Lupines, Desert Chicory, and Brittle Bush are a favorite home for Blister Beetles. These colorful beetles are found all over the world with the exception of Antarctica and New Zealand. There are 335 species in the United States and a great many of them are found in the Southwest. So when there are flower petals to eat, you can find Blister Beetles. You can identify a Blister Beetle by its square head. The first segment of the thorax, or pronotum, is narrow. The body is long and soft. It has long legs and thread-like or beaded antennae. As with a lot of creatures, the bright colors signify that they are poisonous to predators. Skin contact with the Cantharidin found in their blood and soft tissues can cause painful blisters. Animals who accidentally eat these beetles can suffer from damage to their digestive and urinary tracts and may even die. Extracts from Blister Beetles are used in folk medicines. Margarethe has pictures of several species. Some of them are actually quite pretty.

Beetles saved Margarethe's life. Many of her friends believe that she takes too many risks when searching for beetles to add to her collection. She has faced guns of border agents and she says that noise from rattlesnakes have so far alerted her to the dangers they pose. She's had other adventures you will want to read about. While displaying and selling some of her paintings, she decided to use some of her free time to see if she could add to her collection. She saw a cowboy herding his cattle on the other side of the dry bed of the Santa Cruz River from her. She asked him if she could cross over to his side. She was hoping to find dung beetles. He welcomed her but said it might be safer to cross further upstream because of quicksand. Walking upstream, she spotted some horse manure that was full of dung beetles. She became so interested in what she was watching that she spent a bit of time there. She knelt to take some pictures when she suddenly heard noises coming at her very quickly. She looked up to see a wall of muddy water coming toward her. Within minutes the river was full of water. During the next few hours, the water level rose about seven feet. An interesting note is that the scarabs so revered in Egypt are dung beetles.

Margarethe has found three species of lubbers in southeast Arizona. Lubbers are large grasshoppers. She is still watching for at least four other species. The rarest specimen she has found is the Chihuahua Lubber. It is very strange looking with its warty brown surface that serves as camouflage. Plains Lubber eggs need two years of incubation and over-wintering before they hatch. The nymphs molt five times before maturity. It is believed that the Horse Lubbers may emit a foul-smelling froth  from their thoracic spiracles and along with that, they use their wings and a hissing noise to keep predators away.

With winter conditions in Arizona, birds seemed like an interesting diversion. Margarethe has a beautiful picture of a Hepatic Tananger. She treats us to photos of several different birds, including sparrows, woodpeckers, and an especially nice Trogon. She even shares one of her magnificent watercolors.

Arizona: Beetles Bugs Birds and more is an exciting experience. Margarethe teaches us about the things she sees and tells wonderful stories too. Her pictures are fantastic and her talent with watercolors is amazing. When you visit her blog, look all around. When you have finished, leave Margarethe a nice comment and tell her Emma sent you. Her link is below.