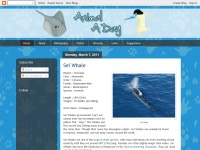 If your main love of nature is animals, I have the perfect site for you. Lauren writes Animal A Day. Her bio says she loves to read, learn, and discover cool new things about all animals. Some she sees every day and others she has never seen, but she learns about them all and gives us the chance to learn with her. I am going to give you a very small sample.


Lauren studied early medieval art and history, but she has always had an interest in biology and zoology. Currently she is working on her Masters degree in library and information science. She says that helps her in her research about animals. She tries to use as many of her own pictures as she can. If she uses someone else's photo, she does give credit.

When I was a child, I learned about the Lipizzaner  horses. Lauren taught me a few new things. These beautiful animals were originally bred by Archduke Charles II on a stud farm in Lipica that he established for this purpose. He wanted first class riding horses and bred Karst horses with Spanish, Andalusians, and Barbs to create this extremely rare breed. The stud farm has been relocated several times because of wars. Although they are not true white horses, they are traditionally white. It sometimes takes the darker young horses 10 years to become white. Lipizzans are known as dressage horses, being strong, muscular, and graceful. They excel at Airs Above the Ground which is a classical equestrian art. It was originally intended for use in warfare. These moves require strength and are beautiful leaps of several types. The Lipizzaner Stallions have been a touring attraction for 40 years.

The ridiculous looking blobfish is one strange creature to see. They are found off the coast of Australia and Tasmania at depths of about 800 meters where the water pressure is about 80 times more than on the water surface. About 1 foot in length, they are mostly made of gelatinous goo. The goo replaces the swim bladder to keep them from sinking. Since they have no muscles they are stationary and eat whatever food floats by. The blobfish has a human-ish face with a bulbous nose and sad expression. The females protect their eggs, often forming large groups to do so. Unfortunately, deep sea trawling is endangering these unique creatures.

Fennec foxes are just the cutest little guys. They are the smallest of all foxes at approximately 28 inches long and they have huge ears to help them regulate heat. Since they are found in desert areas of North Africa and the Middle East, that is a good thing to have. Thick coats work as insulation to keep them cooler during the day and warmer at night. It is also a camouflage for the nocturnal foxes. Furry foot pads keep their feet from burning on hot sand and their kidneys help retain maximum levels of moisture. They are social animals that live in burrows by day and hunt at night. They are listed as animals of Least Concern because so little is known about them.

The Whip-poor-will is found in the eastern United States during the summer, then it migrates to Mexico and Central America for the winter. Lauren points out that the name is an onomatopoeia, meaning that it's name represents the sound it makes. They are not often seen because of the camouflage coloring of their feathers, but you can often hear the whip-poor-will call. They are nocturnal and feed on flying insects. Whip-poor-wills don't make nests. They lay their eggs on beds of leaves and follow cycles of the moon to provide maximum opportunity to find food for the little ones. The chicks stay hidden among the leaves so that predators can't find them.

Dumpy Tree Frog is a fun name for the Australian Tree Frog or White's Tree Frog. They live in northern and eastern Australia and in New Guinea. Often the female is larger than the male of this large frog species. They are greenish-blue in color and able to make subtle color changes for protection. Usually you will see them in trees, but they like wet areas. They do like sinks and toilets. They have a limited ability to chew food so they feed on insects that they are able catch and swallow. Secretions from their skin are being studied to make possible treatments for HIV, staph infections, herpes, and high blood pressure. Because they have a fairly long life span and are good natured, they make good pets.

Lauren has taken an idea that seems so simple that most of us would not have thought of it. Each day she introduces us to a new animal. There is always a picture that brings the animal right up close so you can get to know it. Her writing is personable and at the same time teaches about that day's animal. She welcomes suggestions for animals to feature, so if there is an animal you are interested in knowing more about, Lauren is the person to know. Please visit her and introduce yourself to her animals. When you have finished, leave her a lovely comment and mention that Emma sent you. Her link is below.