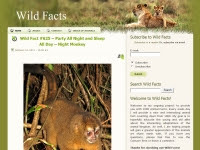 Marvelous things sometimes happen at the most unexpected times. I was visiting Natural Born Record Holders which is the brother site of Real Monstrosities, a site that was Nature Site of the Week a couple of weeks ago. At any rate, there was a link and I followed it to Wild Facts. Wow! There I found a site full of animal facts that kept me both awed and fascinated.

Nathan has a Bachelor of Science degree, specializing in Wildlife and Habitat Ecology. Besides writing Wild Facts, he works for the Canadian government as a Habitat Biologist. Even as a young boy he had an avid interest in animals. When he went to college he became more interested in animal behavior and adaptations. Nathan then decided to write this blog to educate and interest the rest of us about different animal species. He is also happy to answer questions, so if you need to know, Nathan is the go-to guy.

In Nathan's first post he tells us his goal is to present us with 1000 different wildlife facts. Fact 1000 is the first and it is about ants. Many species of ants produce formic acid, mostly to repel predators. They also use it to mark a trail.

The long-eared jerboa is a strange looking little creature. It looks like a mouse with donkey's ears. The jerboa lives in China and the Gobi Desert in Mongolia. It has long legs similar to a kangaroo and uses them to hop around at night to find the insects they eat. The purpose of the long ears is not certain. Some believe they may have been used to hear flying insects so they could eat them.

A great many of us have had a fish tank at one time or another. A beginner's pet is the guppy. There are more than 300 varieties of guppy found in fresh waters in South America. They are variously and brightly colored and they make a good starter fish because they are fairly easy to care for. In captivity guppies can live for 3 to 5 years. Of course, in the wild there are many predators including other fish and birds so they don't usually live so long. Unlike most fish who lay thousands of eggs at a time and swim away to let them fare for themselves, guppies give birth to approximately 100 live babies at a time. The babies are able to sense danger and feed immediately. The unusual aspect is that the female guppy can have more than one fertilization from one mating session. She can get pregnant almost immediately after giving birth.

The giant clam is the largest living bivalve. It can grow to four feet in length and weigh up to 500 pounds. It lives in the Indian and South Pacific Oceans by attaching itself to a piece of coral. There it will remain for the rest of its life. It lives by eating the sugars and proteins created by the algae that live in its tissues. In return, the giant clam allows the algae to photosynthesize by being close to the top of the water and sunlight. Nathan would like to reassure us that giant clams do not eat humans like we often see in the movies.

The glass frog is also known as the see-through frog. You can actually see through its translucent skin to its internal organs! It can be found in the rain forests of Central and South America. It lays its eggs on tree leaves hanging over rivers and creeks. When the eggs hatch, they fall into the water and move to a new home. Laying the eggs in the trees protects them from predators but they are susceptible to parasites. Some species protect the eggs until they hatch.

Wild Facts is so much fun to read. There is a wealth of information in each post, but the posts are quite short so you don't feel as if you are attending a lecture. I enjoyed myself as I read one post after another about these unusual animals. You might want to see the leafy sea dragon... it is gorgeous. Please visit Nathan at Wild Facts. You can leave him a nice comment when you are through and tell him Emma sent you. His link is below.