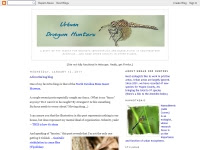 Urban Dragon Hunters is the product of a husband and wife team. Julie, also known as Nannothemis, is an ecologist. She is researching the importance and function of urban ecosystems. Darrin, or Stylurus, is an engineer, birder, and naturalist. When his "old soccer injuries" don't interfere he is a whiz with his insect net.

They live in Wayne County, Michigan, which is where Detroit is located and that along with its suburbs is quite an urban area. They believe that you don't have to leave the city to find the nature you are looking for. Their main interest is odonata (dragonflies and damselflies), however they also enjoy other insects too.

The first post is all the way back to 2004! Julie writes about going to Sherwood Park in late summer and spotting a Comet Darner. This particular type had only been seen in two other counties in Michigan before and they were seen at ponds with no fish.  Sherwood Lake has fish. Julie thinks that somehow this guy managed to wander in from elsewhere. The problem was that even though she saw it several times, she couldn't capture it to make a "legal" identification.

In July, 2005, we see a lot of beautiful pictures. Most of us like the delicate lacy wings of dragonflies. There are several posts here. Julie confers with her contact at the University of Michigan Museum of Zoology to update her list of species that she has not yet spotted. They also look at some recorded sightings that might be in error. Julie and Darrin don't always stay in Michigan. This month they went to Kentucky. They had problems finding access to water areas so they were disappointed in the number they spotted but they did get some good ones.

One day while they were on the hunt, Darrin netted a male slylurus. There were some guesses at what it was exactly. When they got home they did some studying and discovered that it was an Elusive Clubtail. It was  the first adult specimen in Wayne County and only the ninth in Michigan.

Once again in Kentucky, a visit to Berheim Forest was fruitful. Julie and Darrin felt as if they had a poor showing but they saw quite a few and got some fantastic pictures.

Often when they go out, our team has a particular species to look for. They aren't always successful, unfortunately. One day they found several different odes, as they call them, but not the one they were looking for. Our bonus is that they took some extraordinary pictures. I particularly like the Eight-spotted Skimmer. They also took a trip to Oregon. Again there are some wonderful photos.

On a trip to Arizona to visit family, they took the opportunity to see what they could find. There is a picture of a fierce looking Variegated Meadowhawk. Back home again they had good luck in a few different locations. There is a series of pictures of Mottled Darner perched on the side of a tree. Lovely.

While searching for an adult Arrowhead Spiketail, they found three exuvia. An exuvia is the remains of an exoskeleton and these were found attached to trees. There are once again photos of various species in various places. The blue coloring on a Marsh Bluet is gorgeous.

Urban Dragon Hunters is a good look at dragonflies and damselflies. They are such beautiful creatures. I learned a lot about them and their habitats. Julie and Darrin are an excellent choice to be our guides as we are educated about and entertained by odonata. The pictures alone are worth a nice excursion through their blog. After oohing and aahing at the pictures, please leave a nice comment and tell them Emma sent you. One thing to remember is that dragonflies are not available in the winter in Michigan, so winter posts are few. Their link is below.