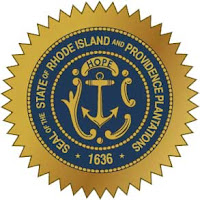 Now we are back to our alphabetical order. That means that Rhode Island is our next destination. The weather here is moderate so you have your choice of something cold or something hot to drink. I'm in the mood for a tall glass of milk. I put out some cheese and crackers if you're hungry. I have a bunch of internet links and the visitors guide ready. Are you ready to explore Rhode Island?


The Ocean State is the 13th state of the United States. The legal name of the state is The State of Rhode Island and Providence Plantations. The state bird is the Rhode Island Red, a type of chicken, and the state rock is cumberlandite which is found only in Cumberland, Rhode Island.

Rhode Island has many other "firsts". It was the first state to make slavery illegal, was the beginning of the industrial revolution with the first commercially successful cotton spinning mill with a mechanized power system, and had the first Fourth of July Parade and therefore the longest running because they still have it every year. It is the home of the first Baptist Church, first Quaker meeting house, and the first synagogue in America. The first female newspaper editor was in this state as was the first labor strike in which women participated. The first armed act of rebellion against Great Britain and the first naval battle of the Revolutionary War were fought here. The Rhode Island General Assembly created the first standing army in the colonies and later created the first American Navy. Rhode Island first proposed the idea of the Continental Congress and elected the first two delegates. They had the first street in America to be illuminated by gaslight, the oldest continually operated carousel, the first pantented motion picture machine, first lunch wagon, first nine hole golf course, and first automobile race on a track, and the first automobile parade. It is where the first NFL night game was held.

Rhode Island has more than 400 miles of coastline which is a lot when you consider that it is the smallest of all the states. This means that beaches, water sports, water birds, and lighthouses are plentiful. Pomham Rocks Lighthouse can be seen clearly from the East Bay Bicycle Path along the Providence River.

The Watson Farm is a working farm that raises 100% grass-fed beef and lambs. They produce wool blankets. For a small fee, you can wander the farm and walk in the fields with the livestock. You can stroll along the seashore. You will observe birds and perhaps other wildlife there.

Norman Bird Sanctuary and Museum has a lot to offer. Of course birding is the main thing here. They have tours and workshops for beginners and more experienced birders. Migration time is an especially exciting time here. There are swans and egrets, hawks and chickadees, and woodpeckers and towhees to name just a few. They even recommend the best places to view particular types of birds. You can also see other animals like ball pythons, dwarf rabbits, and box turtles. This is a 325 acre refuge with more than 7 miles of trails.

The Green Animals Topiary Garden is a seven acre estate with more than 80 trees and shrubs sculptured in the shape of animals and geometric shapes. It is one of the oldest topiary gardens in the country. It also has other historic gardens and a Victorian summer home open for tours.

Rhode Island has rocks for climbing, horses for riding, trails and waterways for exploring. There are campgrounds. Many of the parks have educational classes and tours. It's surprising that there is so much contained in such a small state. When you find where you want to explore, go for it. When you come back home, let me know what you did for fun. There are links below to help you in your search. Personally I'm going to take a look at the apple tree root that ate Roger Williams, founder of the state. Then I'll go to the mysterious stone tower that might have been built by Vikings, or refugees from a Chinese treasure ship, or a Colonial farmer. Sounds like an adventure to me.