Posted by Emma Springfield on February 01, 2011 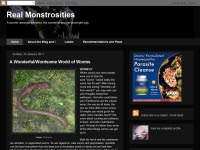 The author of Real Monstrosities chooses to be known as Comment 1. He is from London. It seems that he believes that his surroundings were not terribly exciting. However he spent many holidays with his grandparents in Trinidad in the Caribbean. There he spent a lot of time in the garden observing and sometimes trapping


wildlife. You can sense the joy he felt on those holidays when you read about them. They turned into his immense love of nature, especially the most bizarre of the world's creatures. Now he is sharing them with us.

The deep sea anglerfish is certainly not pretty. It had a huge mouth and big ugly sharp teeth. Comment 1 makes it interesting. It has a large antenna with a bulb on the end. The bulb is filled with bioluminescent bacteria so this fish has its own headlight. Because its stomach can expand enormously, it can eat fish and squid that are twice its size. The female sends off pheromones to attract males. The males attach themselves to the body of the female and then shrink down to become not much more than gonads with her blood nourishing them. In this way her eggs will become fertilized when she is ready. She may have several males attached to her in this way.

Next Comment 1 searches for the largest flower in the world. He narrows it down to three flowers. Since one of them is a palm tree, he decides there are really only two. One is Rafflesia. It is a parasitic plant that grows into the host plant with a haustorium. It grows like a toadstool taking nutrients from the host plant. The flower can be up to 1 meter in diameter. It looks and smells much like dead meat, attracting flies. No wonder it is also called the corpse plant. It grows on a specific type of vine in the rain forest. But wait. It is not the largest. The Titan Arum is also found in the rain forest of Sumatra and is also called a corpse flower. That means that it also smells like rotting meat and attracts flies. The central spike is 10 feet in circumference and is 8 or 9 feet tall. A giant petal that is burgundy on the inside and green on the outside surrounds it.

The Namib Desert is where you will find the Tree Tumbo. It looks like leaves blown off a tree in a windstorm. Actually it is a plant that grows like the carrot. The large tap root grows as far as 30 meters into the ground. Since the annual rainfall in the desert is around 1 inch per year, the tap root needs to store an incredible amount of water. The water is mostly taken in by the two (no more, no less) leaves. They get it from moisture in the air sometimes filled with moisture from the ocean fog. The same two leaves that begin the tree stay with the tree its whole life. These trees can live for up to 2,000 years.

Amoeba Proteus is a single celled creature. They are found all over the world at the bottoms of clean ponds. It has the ability to move by forming pseudopods from its cytoplasm. Pseudopods are also used to trap food and absorb it and to expel waste. These animals have "command centers" or "brains" that help it make decisions such as moving away from harm. They reproduce simply by dividing in two. The interesting thing about the amoeba proteus is that its DNA is made up of approximately 300 billion units or base pairs. Human DNA contains 3 billion.

Real Monstrosities is fascinating. Comment 1 shows us that an animal or plant does not have to be beautiful to be interesting. He has a marvelous story-telling style to his writing. Most of the pictures are not his but he gives proper credit. He also finds videos that are pertinent to his subjects. I had so much fun looking through Comment 1's posts. I know you will too. His latest post is all about worms. After you have looked around, leave him a nice comment and tell him Emma sent you. His link is below.