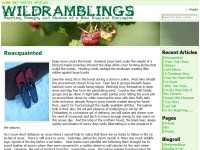 WildRamblings is written by Bill Lattrell. He is a Professional Wetland Scientist and Restoration Ecologist for Valley Environmental Services which is a company he owns with two partners. He teaches ecology to graduate students at Conway School of Landscape Design. His credentials are extremely impressive and I have only mentioned a


small sample. Bill is a freelance writer who began 20 years ago publishing articles in the Heath Herald of Heath, Massachusetts where he lives.

Bill and his wife, Maureen, live in a house that they built using materials that they obtained from the land on which they built it. They raised two sons here. Bill had purchased the land with the thought that he would build a home in his piece of wilderness. He lived in a tipi on the land for a couple of years until he met Maureen and decided a small log cabin would be more suitable for the two of them. The house came two years later and they have been there ever since.

I noticed while reading his posts that Bill finds great solace in trees. In a very early post he is settled into a tree for some archery hunting. He tells of his feelings of wonder at the nature of trees and then he begins to notice other things. A squirrel stops by to grab an acorn before it scurries away. Then a red fox comes into view. Bill makes the sound of a rabbit and the fox looks around for a while before it finally wanders off. What a marvelous way to spend a day.

Bill's interest in nature has always been with him. His stories of childhood are reminiscent of Tom Sawyer. Humorous in hindsight is his tale of the Hornet's Revenge. Bill was 12 and headed for his friend Jeff's house. Since he had a little extra time, Bill decided to explore a swampy area that was on the way. He discovered a hornet's nest. When he observed it for quite some time and saw no activity, he decided to stir things up. Guess what happened to Bill.

Jeff has been Bill's friend forever. As children they were rescuing wood from an abandoned barn so they could build a fort. As they were getting ready to leave, Jeff went in for one last look at some roofing metal and hurt his leg. Bill went in to help his buddy which cemented their friendship further. They have remained close friends and recently went fishing together. Bill was disturbed by the oil spill in the Gulf of Mexico, but being with his good friend helped him to put his concerns away for a while. They spent a companionable, relaxing day on the lake testing an old boat and some new equipment. Bill reminisced about his father's old boat. Then the two friends remembered some fun times from their childhoods. Bill notices the foothills around the lake. Once they were as tall as the Rocky Mountains. Now time and weather have worn them down.

Bill often works with young people. When he, too, was younger, he and his assistant took a group of teenage boys out to experience nature. Bill took his two dogs and his assistant took his dog. As they were hiking to the campsite, Bill realized that these boys had never experienced anything like this before and perhaps didn't feel much like a team. As he was hoping that they would enjoy the experience and learn from it, suddenly his assistant's dog and one of his dogs took off after a deer. After setting up camp and several hours later, the assistant's dog was found. Search parties for Bill's dog were organized for the next morning. They couldn't find him. Reluctantly, Bill took the young men home to their families as planned. He discovered that they had all bonded in the process of the search. The assistant continued his planned hike. He found Bill's dog further on the trail. The dog had wandered into another camp and made himself at home.

Bill has found that there are new creatures in his area. He spotted a dead possum by the side of the road. He says they have been moving steadily north in the last few decades. Because they reproduce so proliferously, they are constantly in need of more space. Bill welcomes them and he looks forward to being able to study them more closely.

Once again we find the subject of trees. A 300 year old oak tree fell. That tree was here for about 50 years before European settlers came to this area. Bill felt a loss for the old tree but he knows that it will replenish the area with nutrients needed for whatever vegetation takes its place. Also there was a huge ice storm that caused a lot of damage to the trees, especially those in higher elevations. People who live there heard loud booms all night long as the tree tops and branches broke off. Bill has been monitoring the area ever since. He was concerned about the effects the damage would have on the ecological balance. After two years, he is seeing signs that plant life is recuperating and animal life is returning.

I had a really hard time choosing which articles to feature today. Bill has a wonderful, rambling writing style. As you read his stories, you don't even realize that he has slipped a bit of education in too. All of his articles are fascinating. There aren't many pictures to accompany the articles but, surprise!, he has a section of pictures for you to look at. For a pleasant time, you should read Bill's posts. Go back and read his older ones too. Then leave him a nice comment and tell him Emma sent you. His link is below.