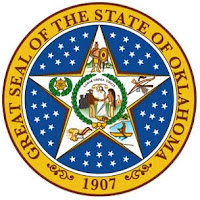 When I got my Travel Guide from Oklahoma, I felt like they really wanted me to visit. Why? Because what I received was a small box containing guides to various areas of the state and brochures and maps. It was quite a haul. When I order these things, I do it the same way you do so I don't get any special information or consideration. So it took me a while to go through all of this stuff. I really liked the guide for kids activities. Now all we


need to do is get a snack and the computer links to go with the travel guides and we can explore Oklahoma.

The Sooner State is the 46th state in the United States. The state wildflower is Indian blanket and the state furbearer is the raccoon. The beginning of October is the annual Bigfoot Festival in Honobia. Join with others who will be searching for this elusive creature. In April, you can try your skills at the Cimarron Cow Chip Throwing Contest. The Oklahoma State Prison Rodeo is the largest prison rodeo in the U.S. Hopefully they will get funding to hold it this year. The Okie Noodling Contest is not about pasta. You try to catch as large and as many catfish as possible using nothing but your hands. The world's largest peanut is in Durant. Tonkawa has the only heart shaped labyrinth im the world. Cavanal Hill is the world's highest hill. Cimarron county is the only county in the whole country that is touching 5 states. In Hugo there is a special section of Mount Olivet Cemetery called Showman's Rest. It is devoted to circus performers and owners.

Oklahoma has a rich history of Native Americans. More than 60 different tribes and groups of ancient people have lived in this state. The infamous Trail of Tears brought several tribes, or what was left of them, to reservations in Oklahoma. Standing Bear Park, Museum and Education Center is 63 acres of trees and native grasses. There is a 22 foot statue of Chief Standing Bear, the tribal leader of the Ponca. In 1879, Standing Bear made his plea in front of a U.S. court to be recognized as a person and a citizen of the country. It's worth doing a Google search to read.The Spiro Mounds Archaeological Center is the remains of a village and 11 burial mounds of an older Native American population that once controlled about 2/3 of the land in the United States.

Route 66 is probably the most famous highway in the country. Before interstate highways, it was the way to get from everywhere east to the west coast. Oklahoma has museums, diners, and exhibits all along their portion of this highway. They call it the Mother Road. As a matter of fact, it was featured in the Grapes of Wrath movie when the Joad family fled the Dust Bowl of Oklahoma to seek their fortune in California.

Robbers Cave was a favorite hide-out for the outlaws of Oklahoma. Inside is the Stone Corral, a natural stone formation where the outlaws kept their horses. The Devil's Slide is a rock slab used for fast getaways when the law got a little too close. The tour through the cave is the equivalent of 8 flights of stairs.

Oklahoma has wildlife galore. For birders The Great Salt Plains State Park offers outstanding opportunities. The lake itself is 2/3 as salty as the ocean. White salt flats surround the lake and feature hourglass shaped selenite crystals. There are hiking, biking, and riding trails in the state. Oklahoma has more man-made lakes than any other state. That means lots of water fun.

Let me tell you, I haven't even scratched the surface of all Oklahoma has to see and do. I told you there was a lot of material and I wasn't kidding. All you have to do is find the places you like.There are links below to help you look for what you are interested in. Make sure you check to see if you will need reservations for campsites, tours, or any other activity you are interested in. Then go see it. You'll have a great time. Then tell me about all the fun you had. I'm going to go to sign up for the Selman Bat Watch to see a million Mexican free-tailed bats taking flight at dusk. Or maybe I'll search for the Tri-State Spooklight that has been spotted on back-roads. Then I think I'll sign up for a cattle drive.