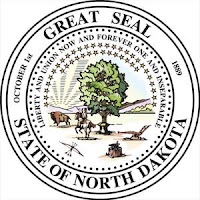 Many people don't realize that some of the wild west tales of the United States happened in the Dakota states. We are going to explore North Dakota this week. And in the United States, we are constantly hearing how cold Minot, North Dakota, is in the winter. Since practically the whole country is cold right now, I guess this is a good place to visit. I have all the materials here and hot refreshments on the fire. Let's plan an adventure.


The state tree of the Peace Garden State is the American Elm. The state fruit is the chokecherry. You haven't lived until you have some homemade chokecherry jelly on warm toast. North Dakota is often considered the 39th state. When North and South Dakota were proclaimed states, President Benjamin Harrison went to great lengths to obscure which was the first to be signed into statehood. Most of the time it is decided alphabetically, so North Dakota comes first.

A few fun facts about North Dakota are: according to Cambridge University, North Dakota is the friendliest state in the Union; the American Automobile Association has named North Dakota as the most affordable state in which to vacation; The National Buffalo Museum Preserve is home to White Cloud, a sacred albino bison and several white calves; The Dakota Dinosaur Museum has the world's largest intact triceratops skull which weighs 1,500 pounds; a rare mummified dinosaur was discovered in western North Dakota; and the geographical center of North America is in Rugby.

The International Peace Garden is shared by North Dakota, USA, and Manitoba, Canada. More than 150,000 flowers give color to this symbol of peace. It also contains a 9/11 Memorial that features steel girders from the World Trade Center. Flower lovers will love it here.

North Dakota is full of scenic byways. All you need is a car or motorcycle and beautiful countryside is there for you to see. The Enchanted Highway is a fun one. Gary Greff has created giant metal sculptures and placed them along the 32 mile stretch of road. A few of his offerings are "Pheasants on the Prairie", "World's Largest Tin Family", "Fisherman's Dream", "Teddy Rides Again", "Grasshoppers in the Field", and "Geese in Flight".

Are you a hiker? There are lots of trails, long and short. The North Country National Scenic Trail, which we learned about from Sharkbytes who became the first woman to hike the entire length of this trail that spans several states, begins in North Dakota. And I get a kick out of the name of Maah Daah Hey Trail. It wanders through Theodore Roosevelt National Park and Little Missouri National Grassland.

Bike trails are abundant. You can choose paved trails or rugged natural trails. Fort Abraham Lincoln has some good mountain biking trails. If you don't want to pack your bikes, the travel guide has a nice link for biking providers.

Canoe and kayak trails are here for water lovers. The only designated State Scenic River is the Little Missouri. While canoeing, you can see the buttes, ravines and plateaus of the Badlands. If you would like to just take it easy, there are riverboat tours. Or maybe you'd like to rent your own motor boat for a faster cruise around the area.

North Dakota is in the middle of the Central Flyway, so millions of birds make their way through the state. And, of course, there are native birds such as the sharp-tailed grouse that are not seen often in other parts of the country. There have been 370 species of birds on the North Dakota Birdwatchers' Checklist.

There are 65 wildlife refuges in North Dakota. No other state has so many. Sullys Hill National Game Preserve gives you a good opportunity to view American bison, elk, white-tailed deer, and prairie dogs.

Like to explore on horseback? North Dakota has more than just a few trails for you. Turtle Mountain State Forest has more than 7,000 acres to roam in. They offer day-long riding facilities and primitive camping is available. There are also several ranches that are happy to have you stop by to ride. The Cannonball River Company even has wagon train trips. You'll need to make reservations for that one.

In the winter, snowmobiling, skiing, snowshoeing, dog-sledding and snowboarding are popular. You could even try your hand at ice fishing. I think I'll stick with making a snow angel and a snowman.

Have I given you some ideas? Plan your adventure. Feel free to use the links below. The travel guide is always helpful. When you get home, let me know what you did for fun. I believe I'll go see the Killdeer Mountain Battlefield State Historic Site then take a look at the Roger Maris Hall of Fame.