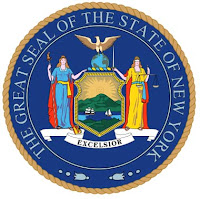 Well, Folks, it's official. I'm getting old. I really thought I had one more day before our trip to New York. What happened? I was just off by a day. All I can say is grab some hot chocolate and toast (one of my favorite snacks) and let's get started. Of course I have my travel guide and internet links. I will mostly exclude New York City because we want to be out in nature, but you never know what might pop up.

The Empire State is the eleventh state of the United States. The state animal is the beaver and the state muffin is the apple muffin. The opportunities for outdoor adventures in New York are astronomical. Wait until you see some of the things I've found.

One of the first things to see is Niagara Falls. Just to stand by the falls as they rush over the edge is an amazing experience. You become hypnotized by the sheer volume of water that roars by. I could watch for hours. The Maid of the Mist boats let you ride right up next to the falls as they land in the water below. They provide rain slickers and hats but don't wear clothes that will be hurt by the water. You always get wet anyway. The Cave of the Winds Tour lets you get within 20 feet of the Falls. Or you can take the trolley through Niagara Falls State Park. This is a great place for a family vacation and one that no-one will forget. In a state with hundreds of waterfalls, Niagara Falls is the most magnificent of all.

The Adirondacks represent the largest natural wilderness region in the eastern United States. It is an area of over six million acres. This region (larger than the state of Vermont) has over 3,000 lakes and ponds, 2,000 miles of hiking trails, snowmobiling, skiing and historic attractions. If you drive through during the fall when the leaves are changing colors, you will see colors that there are no names for. Another must-see.

Now I don't normally talk about zoos. I am making an exception for several of reasons. The New York State Zoo is not in a huge metropolitan area. It is a showplace for animals from the state of New York. Last, but in my mind most important, the first animals were purchased with funds raised by the children’s Park Zoo Club. The club, under the leadership of a twelve-year old boy, was formed as a support organization to provide a source of funding to feed the animals and construct small habitats for animals like porcupines, raccoons and other small carnivores. I think it will be worth a look.

Ellis Island was the center for immigrants on their way to the United States through New York. Right now the island is closed for repairs, but it is due to re-open for tours in 2011. If you check the link below for Ellis Island, you can look for the names of any ancestors that came through that way. I'm going to include the Statue of Liberty which is in the New York Harbor not far from Ellis Island. The full name of this lady is the Statue of Liberty Enlightening the World. She is the first thing many people see when they arrive at the United States. If you want to go visit these two places, please keep in mind that all visitors must pass through security screening. You might want to check before you make your reservations (required) to see what restrictions are in place.

New York is a state of great beauty. The small towns and farms are so different from the City of New York. There is scenery and outdoor activities for every type of nature lover. There are also many tourist attractions that are worth seeing. The Baseball Hall of Fame is one. Another is the National Women's Hall of Fame. So get out there and enjoy yourself. There is something for everybody here. As for me, I want to see Central Park. I hear it is a good place to see a bit of nature in New York City. Then, seeing as how it's New Year's Eve, I believe I'll mosey on over to Times Square and watch the ball drop to mark the arrival of the New Year.

Make sure you look at the Free Wallpaper that Ratty posted today. I sort of stepped on his toes here. Then look at the links below to plan your own adventure. After you've had your fun, let me know what you did. And Happy New Year to you all.