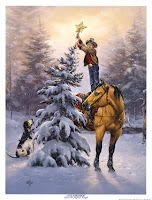 Well, here it is. Christmas. Out on the range, life doesn't change much. Cowboys still have to herd the cattle and take care of chores. Taking time out to celebrate a holiday isn't always easy and it can be a lonely time. But cowboys are also resourceful. They make do with whatever they have. And they have a sense of humor too. Here's a poem with a cowboy's take on Christmas. Thank you to David Kelley who was witty enough to write this.

MY COWBOY'S NIGHT BEFORE CHRISTMAS
‘Twas just before Santy came, the story is told.
Cattle weren't stirrin', fact they's bunched against the cold.
The tack was hung near the chuckwagon with care.
Why, we didn't know Santy was close anywhere.

Cowboys on the ground were wishin' for their beds
While nightmares of wild steers ran through their heads.
‘Tween now and the next gather, we needed a nap.
Cookie had just finished, and tied down the flap.

When out past the cavvy, there rose such a fuss,
I sprang to my feet, leavin’ the bedroll a muss,
And grabbin’ my shotgun and my ragged ol’ hat
I run t'ward the racket thinkin' “…what'n thunder's that?”

When thoughts of amazement through my head courses,
It was a buckboard teamed up with draft horses,
A driver in red buckskins, so spry and dainty,
I know’d in an instant, it must be ol’ Santy.

Quicker than jackrabbits, them horses they came,
And, he’s shoutin’ commands to each one by name…
“Get a step, Joe!. One more, Prince!. On, Big Ed!
Pick it up, Sam! Tighten up, Lou! On, Old Ned!

Don’t spook the cavvy, back away from them pens,
You’re a pullin’ this wagon like a bunch of ol’ hens!
Now, when I haul on these lines I mean to stop.
Hold up in this cow-camp like a ton of cow flop!”

They sat down in their riggin’, like I knew they would,
With a wagon of goodies … made of leather and wood.
Then, in a twinklin’ with no further delay,
He said, “Back it up, boys, this here ain’t no sleigh”.

I couldn’t believe my ears, and lookin’ around,
Off that wagon ol’ Santy came with a bound.
He was short, and his chinks reached near to his toes.
He was happy and fat, with a little red nose.

There was a ton of packages and some new tack,
And, ol’ Santy was carryin’ it all on his back.
His eyes sort of bloodshot, much like a cherry,
From "rastlin'" them horses clean across the prairie.

His lips was plumb puckered, his mouth drawn and droll,
(Mine got that way, the day I swallered my Skoal.)
He was holdin’ a piggin’ string tight in his teeth,
Not fer’ tie down, but for tyin’ "up" a fine wreath.

His head was too big and he had a round belly,
No doubt derived from eatin’ Texas Chili.
He’s chubby and plump all right, I’d say quite jolly.
I laughed plumb out loud when I seen him, by golly.

He winked his bloodshot eye, and spat ‘tween his lips,
And, it made me to know we were all in the chips.
He weren’t much for chatter, just done what was due,
Givin’ presents and goodies to the whole durn crew.

Then, he stuck his finger in his wee little ear,
Wallered it around and said, “We’re through bein’ here”.
He fled to the wagon, and his team called ‘em up,
“Come on you swaybacks … what’s the dad-burn holdup?

We won’t be back till next year ‘cause we’re flat broke.
Merry Christmas, my eye, I just busted a spoke!”
© 6/98 All Rights Reserved * David Kelley


Merry Christmas to you all.