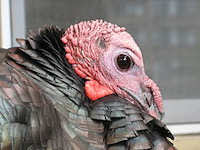 Seeing as how we Americans are getting ready to celebrate Thanksgiving tomorrow with a feast of one of our favorite birds, I thought I would add one more Turkey of an article here at Nature Center Magazine today. I've decided to bring you some fun Turkey Trivia that you may not already know. Let's get to the fun!


How many of these fun facts do you know?

Have a Happy Thanksgiving!
.