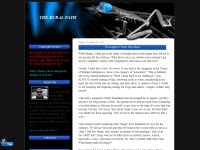 Introducing Knapperbill who writes The Rural Path. He is a technology teacher who likes being outdoors in any weather. He prefers the area around his home, but, of course, will take advantage of any place he happens to be. Knapperbill believes that some of the greatest wonders of nature will be found right outside his own back door.

Knapperbill was getting ready with his kayak when he spotted a skull on the riverbank. Being Knapperbill, he picked it up and took it home for later examination. After some thorough cleaning, he discovered that he had a snapping turtle skull. This skull is 4 and 1/2 inches long. Paired with the jaw bone which he also found, he had a good example of why a person should be respectful of a snapping turtle. To end the post, there is a real live snapping turtle that Knapperbill managed to escort from a road. This fierce looking turtle was not pleased but he was not run over that day.

Not all hikes are idyllic. During one hike, Knapperbill was attacked unmercifully by mosquitoes. He was miserable, but it did not interrupt his findings. With beautiful photos to accompany the words, we learn about a locust borer, a sumac flea beetle, a cocklebur weevil, and a bold jumper (spider). I don't believe I have ever seen a sumac flea beetle. They are lovely to look at.

On a rainy, foggy day Knapperbill was only able to take a short hike before he would get wet. He decided to do some investigating inside instead. Knapperbill had collected some owl pellets on a previous hike and froze them for just such a day. Owl pellets are made of hair and bones that owls cannot digest. When enough material is in the owl's gullet, it disengorges them in the form of pellets. Knapperbill dissected the pellets and found two complete vole skulls as well as particles from other small animals. If you would like to try this, please follow the precautions that Knapperbill describes. You don't want to pick up a disease or parasite of any kind.

On a recent cold, windy day, Knapperbill went looking for beaver. Along the way he spotted several little possums. They did not want to pose for pictures, but enterprising Knapperbill did get a picture of one cutie. He also found a napping raccoon. All you can see in the picture is a foot and part of the tail. He looks very comfortable. Then Knapperbill reached the area of the beaver activity. He has pictures of trees in the process of being felled by these creatures, as well as photos of the dam.

I cannot begin to tell you what a difficult time I had choosing which posts to highlight for you. The Rural Path has such a hands-on feeling that I felt as if I were right there with Knapperbill. He is a skilled writer and photographer. His love of his subjects shows in each post. You will have a hard time pulling yourself away from this site. The good thing is that it will be there later when you want to visit again. Before you leave the first time, please leave Knapperbill a nice comment and tell him Emma sent you. His link is below.