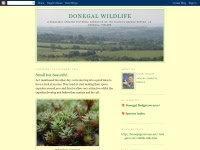 Stuart Dunlop is a resident of County Donegal in Ireland. After writing Donegal Hedgerow for five years, Stuart decided on a change. Donegal Hedgerow was somewhat of a pioneering site about wildlife in County Donegal. It won awards and Stuart appeared on radio and television to speak about his site. It is also used by universities


and schools as a basis for courses. Stuart wanted to do something a little different and that is how he came to write Donegal Wilderness.

You will see a lot about mosses in Donegal Wildlife. Because of more rainfall in North-west Ireland, mosses are plentiful. Stuart has pictures and descriptions to share with us. I had no idea that mosses could be so lovely. His photos of Rhytidiadelphus squarrosus are breathtaking. There are usually several different examples of whatever the subject is that he posts. It makes each post colorful as well as interesting.

The Conopid fly fastens its eggs on the soft undersides of worker bumblebees. The bumblebee then tends to change its feeding habits to benefit the larva. Isn't nature remarkable? This post has other examples of insects (watch for the Trombidium sp. mite). There is a pretty Eyebright too.

A blog posted just before spring features leaf-miners. Some insects burrow into a leaf to spend cold weather there leaving trails along the leaf. Fascinating!

With winter coming on again, Stuart finds things in nature slowing down a bit. The many spider webs are visible because of the heavy dew. There is a closeup of the dew drops that is absolutely gorgeous. A "curious fuzzy bobble" on a Germander Speedwell turns out to be a gall caused by a plant louse.

Donegal Wildlife is yet another educational, enjoyable blog. The pictures are stunning. I found it hard to pull myself away long enough to write my post. You will do yourself a favor by going through this site. When you have finished having a good time, please leave Stuart a comment and tell him Emma sent you. The link is below.