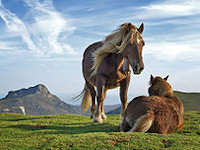 Howdy, Folks. I have an urgent matter to take care of so I won't be able to write about our next state. I will be back next week. In the meantime, I have some facts for you. As you might have guessed I love my ponies, so let's learn a little about our equine friends. Next week we'll go to Mississippi, so be rested.

50.million years ago the first horses in the old world were Hyracotherium. They were about as tall as a fox and had toes. Before 3000 B.C. horses were just another wild animal hunted for food and skins. Then man began to tame them and train them as beasts of burden. When the Indo-Europeans arrived in Greece, they brought horses with them. Shortly after that the Hyksos or Amorites introduced horses and chariots to Egypt.

About 54 million years ago horses known as Pliohippus were in North America. They had a single toe and hoof much like present day horses. They were hunted by hyena-like dogs. Then suddenly about 8000 to 10000 years ago they disappeared from the western hemisphere. No one is sure why. Horses were re-introduced to the Americas by the Spaniards.

There are more than 350 breeds of horses and ponies.

To tell how old a horse is, check its teeth. By the time it is five years old it has all its teeth but they keep growing longer.

A horse can walk, trot, canter, and gallop.

Any kind of mark that appears on the forehead of a horse, is called a star, whether or not it resembles one.

A fully-grown small horse is known as a pony.

In most cases, the foal is born at night, away from danger and prying eyes.

The height of a horse is measured with the hand, where each hand equals four inches.

Horses usually live for around 20 to 25 years.

Falebella of Argentina is the smallest breed.

A breed of horses called Akhal-Teke from Russia can go for days without water or food.

Horses use their facial expressions to communicate. Their moods can be gauged with the help of their nostrils, eyes and ears.

A farrier or blacksmith is the person who cares for a horse’s feet.

Did you learn anything? See you next week.