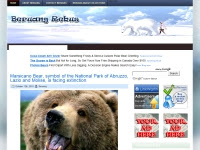 Beruang Rebus is a site that features mostly bears. I was surprised that a site could be so focused on one type of animal. Amazingly enough, not one post is like another and they are never boring. Beruang Rebus has a mysterious author. When I checked the "About" section, I found that beruang is a word that means bear in English. I do love a bit of intrigue.

Polar bears are the largest land carnivore according to Beruang. Their primary diet is seal which they kill with their massive paws. (By the way, did you know that all polar bears are left-handed?) If seals aren't plentiful, they may eat smaller animals such as lemmings. They will also eat waste materials and berries. The walrus is the natural enemy of the polar bear. If the walrus is large enough, it can even kill the polar bear.

The American black bear was the inspiration for the teddy bear. President Theodore Roosevelt captured a black bear while on a hunting trip. A toy manufacturer saw an opportunity and made stuffed toy bears that are one of the most popular toys ever.

I learned that panda bears have six fingers. Well, actually there are five fingers and through the process of evolution, a bone from the wrist has developed to have muscles of its own. Bamboo shoots are the preferred diet but they will eat small rodents, lizards, and fish. Because the numbers of pandas keeps decreasing, zoos that have pandas work quite diligently to have them reproduce.

The koala is actually a marsupial. At one time in danger of extinction, conservation measures have fostered a comeback of these cute little animals. They primarily eat eucalyptus leaves and buds giving their fur a lovely odor. Koala males often have multiple females for mating purposes. As marsupials, the young stay in a stomach pouch and nurse until they are ready to emerge.

Ferocious grizzly bears have a diet of about 90% plants. It will eat larger animals like deer, elk, and bison and also carrion and rodents. The grizzly has a huge fatty hump on its back that gives power to its legs. These are extremely aggressive animals and have been known to attack people.

Now, Beruang does have articles about a few other animals that are worth reading too. What I particularly enjoyed about many of the earlier posts was the links at the bottom. They lead you to pictures of the bears in that post. I really like to see bears, especially polar bears, lounging around almost as if they have no bones at all. They certainly know how to relax. Please take a look around Beruang Rebus. When you have finished, please leave Beruang a nice comment and say that Emma sent you.


Do you write a nature website or blog, or know of one, that you would like to introduce to our readers? Send me the information and I might feature it in one of my next reviews. Click here to find out how: Feature My Nature Site.
Labels: Nature Site Of The Week