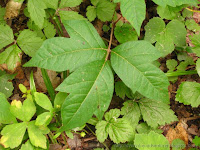 The subject of poisonous plants is something I have wanted to talk about for a long time. Since I started hiking I've been looking for a common plant around here. Most of you in North America have heard of it. It's called called Poison Ivy. I know what it basically looks like, but positively identifying it can be difficult sometimes.

The plants you see in these pictures could be poison ivy or they could be another plant called boxelder, which is actually a non-poisonous tree and is also common here. Every picture I see confuses me more. As far as I know, young boxelder trees resemble poison ivy more than any other non-poisonous plant. 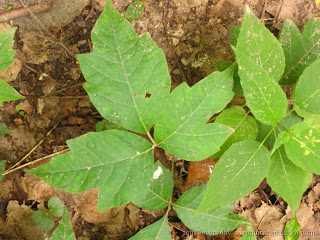 As some of you know, it can get confusing trying to identify certain plants. That's not unusual for anyone though. Most people would not be able to tell the difference between these two plants. There is one very easy way, but I don't recommend it at all. If you touch poison ivy you'll end up with a very bad rash in about a week. The boxelder is safe.

If you want some really good additional information on some poisonous plants you can go to this link. It also shows pictures of poison ivy, boxelder, and other plants that have been confused with poison ivy. Websites like the one in my link, along with some of the helpful park officials I've talked with, have helped me get a better understanding about poisonous plants. 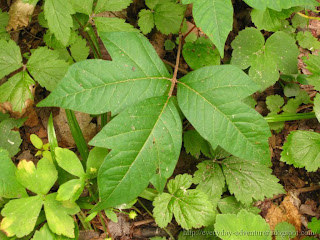 Speaking of the park officials, if you happen to be at a place where they have people like that working there, they may have some very valuable knowledge to share. If you're polite, you can learn all sorts of things from them. I've had great conversations with a woman I meet sometimes who works at my nearby nature park. She has helped me a lot with identifying a few poisonous plants, and she even told me the best place to find deer in the park this time of year.

I hope this story teaches you something. And if there are any of you who might know more about poison ivy, any extra tips on any kind of poisonous plants can be helpful. But the best thing for most of us who don't know which plant might be poisonous, don't touch any of them! I know I won't.
.
Nature Tips