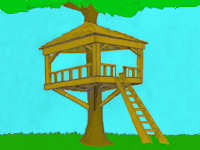 The whir of a circular saw gave clue to the men working on a new home.  Fields were rapidly closing in with the expansion of housing in my area. Our home was ten years old, but now everyone wanted to rush to the suburbs. This was of some advantage since we were carpenters also. In a tiny strip of trees we had placed the
platform to begin making a treehouse. This was to become similar to what we had seen in Tarzan movies, perhaps even bigger. At the present we would start with an eight by twelve platform and work from there.

Taking a large coffee can in the baskets of our bikes we headed for the new house. We had made friends with the workers, sometimes running to get them a board and handing it up. They knew we wanted their scraps so pointed us to them and told us to help ourselves. We walked around the exterior grabbing nails that had been dropped and filling our coffee can. When we had what we wanted we always thanked them. In a few years I would get paid to clean up their sites from this friendship formed.

By the end of summer we had walls and a roof to cover our palace. It wasn’t quite what we originally pictured, but made us very proud. It was a daily plan to all meet there and work on it the entire summer. Breaks were taken to play baseball in a field, go for a swim and even look for an apple tree to enjoy. We would jump from the roof into a nearby tree thinking we were monkeys and see how far we could go without touching the ground. Hiding in the weeds and trying to sneak up on our friends often gave you a number of insect bites our mothers treated constantly. My Dad made me buy my own hammer since he kept losing his. Soon I purchased a saw that I still have, although very dull to use after fifty years.

Additions began to slow the following year, we were happy to have what we had built and sometimes needed to repair. Soon we all got paper routes and other side jobs that pulled us away, but still visited our site. Younger siblings sometimes wanted to use it, but we chased them away. They could make their own forts in the grassy field. We still played in this set of trees, except when we could get enough for a baseball game, croquet,  mock wars or kick the can. Bringing new friends to our castle sometimes was met with a snicker; they didn’t always see the beauty as we did. A first sweetheart cooled my jets a bit, calling it a bit immature.

In following years we lost track of our site. Siblings won and soon had the area, but they weren’t as talented as we had been and soon left it for other endeavors. I left home for college and came back in total dismay to see that the developers had bulldozed our line of trees and an old horse barn not far away. Houses filled the area that was once planted in corn and hayed every year. I started building on a crew unaware of what I was doing with the expansion. Money was good and it helped pay for my needs in an adult life. I forgot about the kids moving in and where they would play. I shared this story with many, unaware that they may have never ran through a cornfield, rolled down hills or built a fort or treehouse, and never would. We are part of a lost generation and children have found electronics to keep them busy. Obesity is soaring, where we could never get enough to put on weight staying so active. One of the first things I shared with my children was building a treehouse. And I laugh when I drive past the tiny platform and think of all the great times they had playing in the great outdoors.
-

This story was written by Steve of Out On The Prairie. If you'd like to read more stories like this one, follow the link below to Steve's blog about his life and others who lived on the prairie. Leave him a nice comment to let him know you were there.
Go take a look: Out On The Prairie
Nature Tales