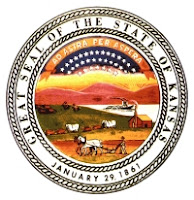 Scorching heat seems to be all over our country so I shouldn't complain. But it sure has been hot. There was a cooling rain earlier so I rested while it was comfortable. Now I'm ready to plan a new adventure. Kansas is my next destination. I have all the usual tools... Travel Guide and computer links. A cool drink is in order and I'm all set. We're off to Kansas.


Kansas is known as the Sunflower State. It is the 34th state. Official song is "Home On The Range" and the state soil is Harney Series.

Since I am a Civil War buff and a lover of all things cowboy, I find Kansas to be a great source of information about both. I won't go into the list of famous people from this state because I figure you can look them up if you're interested, as with any of the states. But Buffalo Bill Cody's father was one of the first, if not the first, casualty of the argument concerning slavery in the United States. As a person vocally against slavery, Isaac Cody was attacked by pro-slavery people and left for dead. Bill was not yet a teenager and had to drag his father to safety. After the family hid him in the cornfield until he was well enough to flee, Isaac Cody died from complications of the attack in another part of Kansas. "Bleeding Kansas" is one of the grisliest atrocities of the Civil War. Enough history! On to adventure.

Kansas is considered the center of the contiguous United States. Because of rural flight, the population of rural Kansas gets smaller. There is less opportunity to make a living in the rural areas. There are more than 6,000 ghost towns and dwindling towns. One of the more unique museums I have ever read about is the Kansas Underground Salt Museum. You can get on a tram that takes you for a dark ride through the mine. At 650 feet below the ground the museum offers exhibits like the re-creation of the laboratory where scientists found 250 million year old bacteria living in salt crystals.

Birders will love this state. The wetlands near Great Bend has a computer kiosk equipped with eBird Trail Tracker Software developed by Cornell University. Species of birds are sighted at Cheyenne Bottoms Wildlife Refuge and Quivira National Wildlife Refuge. The Kansas Wetlands Education Center has a glass wall looking over the marsh and a walkway leading to an observation deck. More than 300 species of migrating birds stop in Kansas going either north or south for the changing seasons.

The world's largest tallgrass prairie is located mostly in Kansas. Cattle and buffalo roam here along with a variety of wildlife. There are several farms that take in people who wish to experience the cowboy way of life. You can sleep outdoors or in a wagon, or in buildings made to accommodate guests. You'll be able to eat from a chuck wagon (invented by an ancestor of one of the ranch owners) or in a bunkhouse that is equipped with a large kitchen. When the working day is over, you can sit and enjoy the night sounds of the prairies until it's time to turn in.

Long ago, Kansas was the bottom of the ocean. They still are finding fossils and bones belonging to sea animals. Monument Rocks is an area that looks like you just stepped onto another planet. Niobrara Chalk has been sculpted by centuries of glaciers, water, and wind to make these rock formations.

There are hundreds of miles of trails for hiking, riding, biking, or whatever you like to do. Water areas are here for water sports. Campgrounds are plentiful. There are bunches of activities for the kids. Kansas is a great place to be. Find the place you like best, visit it, then come back and tell me how much fun you had. Adventures are easy to come by... you just have to go out and live them. Links are below to help you find your spot.