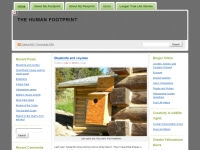 Leslie is a trained naturalist and landscape designer from the Bay area of California who is now happily living in Wyoming. She winterized a 1950's log cabin near Yellowstone and decided to relocate because she felt drawn to the area. Her blog is The Human Footprint. In it she shares her experiences as she watches the footprint she leaves on her journey through life.


Leslie is the faithful companion of Koda. Koda is responsible for all of Leslie's great adventures and sees to it that Leslie is safe and well-fed while out in nature. Koda was trained by Leslie, Sandra, and Soona in the fine art of understanding humans. Basically, Koda is just your everyday charismatic goofball.

Leslie has experienced some fascinating things on her journey through nature. I am absolutely in awe of her meeting with a genuine mountain man. Chuck Streeper is the last genuine mountain man. He chose to live away from civilization and subsist on whatever nature provided him. Leslie and Koda met him as she was hiking near Wind Rivers, Wyoming, and ended up spending several days with Chuck and a man named Rich who was learning survival skills from Chuck. They slept under the stars and counted satellites. Leslie was as interested in Chuck's life as I was in reading about it. Chuck's heroes were people like Jim Bridger and John Coulter who lived the same kind of life he lived. It's one of the most spellbinding true stories I've ever read.

The post about scat was full of information. For instance, one should never sniff raccoon scat because they carry a parasite that is fatal to humans. There is a lot to be learned about an animal from it's scat and Leslie helped me learn a little about scat. She has a humorous little story about a coyote leaving a gift for her dogs. And she also has a few pictures to illustrate some of her findings.

Recently, Leslie and Koda were planting seedlings. While digging they came upon a buried cache of meat. Of course Koda immediately took over while Leslie went on with her planting. Later when she was speaking to the assistant curator (her part-time boss) at the Natural History Lab in the museum, she asked for his opinion of what type of animal might have buried and left the meat. He thought it might have been birds. When Leslie went to check on her seedlings, the one planted where the meat had been was dug up and its protective cage was pushed aside. Definitely not birds. So she is watching trying to solve the puzzle of what animal it was.

Leslie is also a poet. She has several of her poems for you to see. She shows some of her landscaping ideas. There is a link to her landscaping site. It has some beautiful photos of her work. I really hope you look at The Human Footprint. The link is below. It is like reading adventures of the past. After you read it, please leave a comment and tell her Emma sent you.