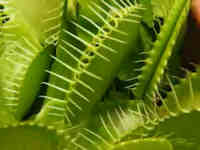 The Venus Flytrap is one of the world's most well-known carnivorous plants. Most of us don't normally think of plants as being anything more than harmless, but this one is a killing machine. Carnivorous plants such as this one actually eat animals that come too close. This week's Cool Nature Video features a BBC Worldwide look at this very strange plant at work.


Lucky for you and me that plants like this only grow big enough to eat small animals such as insects. Just think of what would happen if they were bigger. Would we think of them as monsters? Does their small size make them any less monstrous? Watch the video and find out for yourself.

From BBCWorldwide - February 09, 2007 - David Attenborough looks at how this well known carnivorous plant captures its prey.