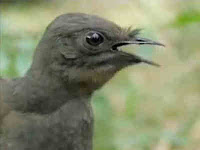 The lyrebird is one of the most fascinating creatures I've ever seen, and heard! This bird has the incredible ability to mimic natural and artificial sounds it hears around it in more ways than you'd believe. The video begins by showing the lyrebird mimicking several other birds. It continues by showing us this bird's ability to mimic man-made sounds like chainsaws and camera shutters.

Lyrebirds are one of Australia's most well-known native bird. While known for their mimicry, they're also known for their extraordinary beauty, especially the tail feathers of the male bird. The males are also known for their courtship ritual. These birds have been known to mimic chainsaws, car engines, barking dogs, camera shutters, rifle shots, fire and car alarms, the banging sounds of hammers, crying babies, and even human voices.

From BBC Worldwide - February 12, 2007 - Here's another one from David Attenborough and BBC. This time Mr. Attenborough presents the amazing lyrebird, which mimics the calls of other birds - and also some amazingly human sounds. This video clip is from The Life of Birds. This odd bird is one of the most fascinating creatures in nature.

If you'd like to see more of the amazing lyrebird, you can click on this link: The Amazing Lyrebird