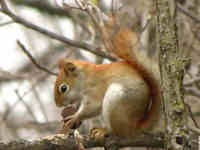 This week's Cool Nature Video is actually a two website story. I decided to do a little experiment by demonstrating how Nature Center Magazine can collaborate with a blog to tie in our video article with a blog post. You can read the story of the squirrel in this video here, and see the video when you click to read more of this article.

The video for this week is of an American Red Squirrel eating a nut at a very speedy little pace. It might not seem like much compared to some of the sensationalistic videos I've already shown you, but it's still just as fun to watch. I'll have more crazy videos, but this time it's this funny red squirrel.

The American red squirrel's closest relation is actually the Douglas Squirrel. These two are both also called the common names, Pine Squirrel and Chickaree. All three types of squirrel mentioned are known for their smaller size as well as their amazing cuteness.

This video is my own creation. I took it on April 6, 2010. You can go to The Everyday Adventurer or Rattilla1's Channel on YouTube to see more of my work.