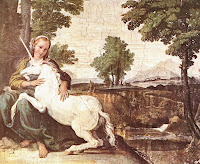 Do unicorns exist? Have they ever existed? They are featured in many very old pieces of artwork. At one time people believed they were real. There have been stories about them, and even a song. But do they exist today? That is the question that may be answered in this video.

Now, I must warn you that if you're looking for a horse with a horn in this video you're going to be sorely disappointed. The unicorns here are a kind of goat, and they are very real. If you immediately think that disqualifies these creatures as unicorns then read what I have to say first.

Look closely at the picture above. It is a painting that is believed to have been done by Domenico Zampieri in 1602. Very old indeed. That is definitely a unicorn in the painting, but is it a horse like we all might believe? Maybe not. Look closely at its chin. This unicorn has the beard of a goat! That's not the only similarity. Unicorns also have cloven hooves like goats. All unicorns have these traits.

Were unicorns horses? No. Were they goats? Probably not. I think it doesn't matter. Unicorns were unicorns. I don't know how these goat unicorns in the video were created, nor do I care. I'm just here to show you a cool nature video. Now watch the video for a little bit of fun.

We feature cool nature videos from sources around the internet. We always give full credit to the source. Do you have a cool nature video that you think is worthy of being featured here?
Cool Nature Videos