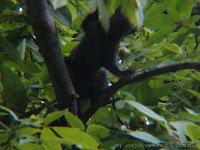 The story below is something I wouldn't usually mention here at Nature Center Magazine because of its gruesome nature. But sometimes a thing like this is necessary to tell. It sounds too unbelievable to be true, and I hope it's not, but some things can drive any creature to do things it normally would not. Read on and decide for yourself if you think this could happen.

A pack of furious squirrels attacked a stray dog and tore it to shreds. This reportedly happened some time in early 2005 in the far east of Russia, in the settlement of Lazo in the Dalnerechensky District.

Three local people walking in a park say they witnessed a stray dog barking at black squirrels jumping from one tree to another. The squirrels then formed a group and suddenly attacked the dog.

The witnesses claim that the squirrels fiercely tore the dog to bloody pieces. The fight lasted less than a minute. By the time the people rushed to try to rescue the dog it was too late. When the squirrels saw the people approaching, they ran off carrying pieces of the dog in their mouths.

The incident has frightened local residents who now prefer to only rush past the park, and they don't let their children play there. They fear that the squirrels may attack again, this time maybe a human. The locals say that if another incident occurs there, it would make sense to fix traps in the forest to catch squirrels.

The squirrel reportedly had little to eat that year. Usually, the squirrels lived only in the woods, but this year they have come to live right in the center of the settlement.

Mikhail Tiunov of the Far East Department of the Russian Academy of Sciences says he has never heard about squirrel attacking other animals before. “This sounds nonsensical that squirrels attacked a stray dog and tore it to pieces. If this actually happened, the life of squirrels in the forest seems to be really hard this year. It is typical of squirrels to feed on nuts, seeds and mushrooms. And it is unlikely that squirrels have become so aggressive as a result of some mutation,” Newsru quoted the expert as saying.

Go here for the original source of this story:  Furious squirrels attack stray dog and tear it to pieces
Labels: Nature News Bits