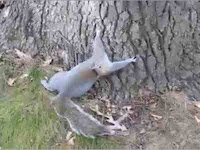 They say on the YouTube channel where I found this that the squirrel got drunk by eating fermented melons. Of course, most of us know that fermentation is the process that creates alcohol, such as you would find in beer.

This poor little squirrel tries hard to climb a tree to get away from these videographers, but it's no use. It's so drunk that it can't even get off the ground. It grabs onto the tree several times, but it just can't get its claws in so it can climb up. I guess it's better off that way until it sobers up. The squirrel was reportedly fine the next day.

This video is by someone called Big Time Attic. It was put on YouTube on April 20, 2009.