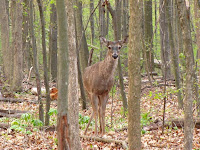 This week's Cool Nature Video is about a deer that attacks a hunter. Or more precisely, it attacks a man who went out with the intention of having an encounter with a deer. I don't know if these people meant for this to happen, but they did want to get close. Watch the video and form your own opinion.

With the spread of humans and urban sprawl, deer find that they have less and less places to go. They sometimes have no choice but to live alongside humans. Living that close means that it's inevitable that there are close encounters. Deer seem gentle, but they are big and powerful.

I've been in many situations myself where deer have threatened me. They have always backed down, but I don't know what the future might hold. I make sure to try and never provoke them, but sometimes just a human presence might be considered provocation by an angry or territorial deer.

This video was by someone called Nexten, from a story on MSNBC. It was put on YouTube on December 22, 2007.