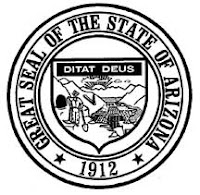 Welcome back to my campfire. I'm ready to explore a new state and I want you to come along. It's been fun going on our excursions so far. I have a new state to explore this week so come with me.

Let's go to Arizona, the 49th state.
Arizona was part of the land the United States received after the Mexican-American War. It is one of the Four Corners states which meet at a point. Probably best known as the Grand Canyon State, it's state reptile is the Arizona Ridgenose Rattlesnake. The official state neckwear is the bolo tie. Most people think of Arizona as a hot desert but there are also mountains where the weather is cold in the winter and cool in the summer. And nature is everywhere so I'm ready to look around.

The Arizona Tour Guide I ordered took almost 4 weeks to get to me. The strange thing is that it is the 2008 model. Even so it has heaps of reasons to visit Arizona and there is a free 2010 version so please order it by clicking this link.  As I always do, I did a search on the internet. I found several sites you will find helpful and I'm going to include a couple more links here. For offbeat tourist attractions click here. For info about Arizona's state parks, this is a great site.

We'll start with the Grand Canyon. Formed by the Colorado River cutting through the layers of rock for around 17 million years, the canyon is one of the Seven Wonders of the World. It is about 1 mile deep, 227 miles long, and maybe 4 to18 miles wide. Native Americans lived in the canyon, many times in the caves of the canyon walls. It is considered a sacred site to some. Most of the Grand Canyon is protected as Grand Canyon National Park, one of the first national parks in our country. There are a lot of ways to see it. Hiking, horse or mule rides, helicopter or small plane, boat or raft, and train are all ways to see this natural wonder. With proper permits you can camp below the rim. For the true adventurer there is whitewater rafting. To just stand and look at nature's awesomeness, you can use the Grand Canyon Skywalk. It's a glass-bottomed walkway built by the Hualapai Tribe and it extends out over the canyon for a view that will take your breath away.

There are so many other places to see. Barringer Meteor Crater is nearly a mile across. Arizona boasts the largest stand of Ponderosa Pine. Cactus abounds. Museums that feature plants and animals from the area are plentiful and most of them are outdoors. Condors are only one type of bird for birders. Hiking trails, biking trails (motorized and pedal) are everywhere. You can see caves and waterfalls. Of course we've all seen pictures of colorful rock formations and Arizona has them. Arizona bought the London Bridge and re-assembled it at Lake Havasu City.

For anyone interested in Indian life, there are many different tribes. Most still live as they have lived for centuries and it is truly an honor to witness some of the ceremonies they conduct. As a matter of fact, the last battle in the American Indian Wars was fought just west of Nogales.

It will take us at least a year just to explore the Grand Canyon. After that there is so much to see and do. I'd love to hear from you when you get back from your own trip to Arizona. Explore, have fun, and let me know all about it.