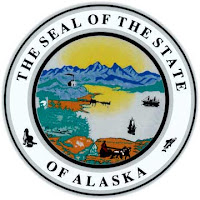 I'm an explorer. My goal is to find out what each state has to offer for the nature enthusiast. I will examine the states alphabetically one at a time. I will show you how to obtain information about a state you might be interested in visiting and give a brief description of what I find. Come with me as I discover the states of the United States.


We are off to Alaska, the largest state in the United States. Alaska became our 49th state in 1959. The United States purchased Alaska from Russia on  March 30, 1867, It was known as Seward's folly because the popular opinion was that there was no value to the land and it was too far away to successfully defend. Now we know that there is an abundance of oil, timber, and GOLD! Since there isn't enough gold available for me to get rich, I'll satisfy myself with exploring nature.

Once again I did a little digging to see what I'd like to do. I ordered the official Alaska Tour Guide. I received it in 2 weeks. To order yours, click on this link.  And click here for the Alaska Magazine. As I always do, I also did an internet search for Alaska for more information. Once again there are some good sites. You have several choices of transportation to get to Alaska. Just remember that traveling through Canada requires a passport from the United States.

The tour guide is a true guide. I didn't get the feeling that it was an advertisement. They divide the state into sections to give the high points to see (and there are a bunch). There are a whole heap of suggested itineraries too. They even tell you what types of clothing are recommended for each area and each season. The state fossil is the woolly mammoth  and the state sport is dog mushing. There are all the usual lodging choices available so let's move on to things to see and do.

Alaska has a longer coastline than all the other states combined. There are several different types of cruises designed to show off wildlife like whales. A ship is a good way to get to the Aleutian Islands. Or maybe a sea plane is more to your liking.There are scenic bus tours, train tours, private tours, or you can drive. There is snowmobiling or maybe I'll take a dog sled.

I learned about so many things to see that my head is swimming. Alaska has several active volcanoes. In fact, Mount Shishaldin has the most perfectly symmetrical cone on earth. This state boasts over 3 million, yes million, lakes. More than 100,000 glaciers make up over half the world's glaciers. Approximately 65% of Alaska (which is more than twice the size of Texas) is owned and managed by the United States Government as public lands.  There are numerous national forests, national parks, and national wildlife refuges. As a matter of fact, the Arctic National Wildlife Refuge is the world's largest wildlife refuge.

There are so many animals. Buffalo, musk ox, Kodiak bears, otters, salmon, bald eagles. Plants and flowers show up everywhere. You can backpack, hike, stroll, or ride to see them. Birding enthusiasts will be thrilled. You can watch salmon run. A person can follow the route of the Iditarod Dog Sled Race held every year to honor the first race to get emergency supplies of medicine from Anchorage to Nome because of a severe diphtheria outbreak. You can watch the northern lights. At the right time of year you can stay where the sun never sets.

Whew!! I'm pooped! There is so much going on in Alaska that you just have to check it out for yourself. I'm also excited and ready to explore Alaska. Why don't you explore for yourself? And when you do, let me know what fun you've had.
Copas